It's just another match: Joginder

Wednesday's semi-final clash between India and Pakistan will no doubt be a high-pressure game, more so with politicians and diplomats from both countries routing for their respective teams. 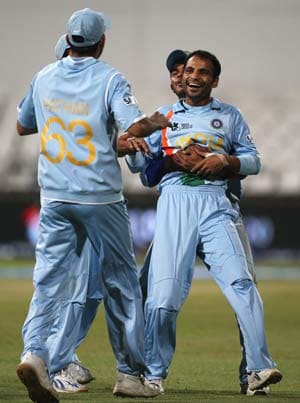 Wednesday's semi-final clash between India and Pakistan will no doubt be a high-pressure game, more so with politicians and diplomats from both countries routing for their respective teams.

It is an unwritten rule when India plays Pakistan lose to anybody, but never against Pakistan in the World Cup. It is this kind of rivalry which makes it special.

The clash in Mohali will be the first between the two countries after a 10-month gap, and first on the Indian soil since the 2007-08 Test and ODI series.

However, Joginder Sharma, India's hero in the T20 World Cup win in 2007, does not think the teams will have any animosity. "I don't think players would think of any other thing apart from cricket. They would treat this like any other match," Sharma, who held his nerves in the final over to steer the team to five-run victory, told MiD DAY yesterday.

Speaking from his own experience, Sharma said: "We treated them as any other opponent during the World T20 final. That worked for us and I am sure our players would be thinking the same way. It is important for us to win the semi-final irrespective of whom we are playing."

He however, admitted that the passion is different against Pakistan. "Ek alag sa junoon hota hai. That is what lifts the team whenever we play against them. There are various incidents in the build-up that fires up the players. But on the field, we only concentrate on winning the match," he said.

India has so far dominated the battle with a 4-0 record against their neighbours in the World Cup. Sharma is confident India will maintain their supremacy tomorrow as well. "It is an ideal match before the final. Mahendra Singh Dhoni is the best man to lead the side in such situations," he said.

"We will not just win the semi-final, but also the final.

"Everybody has performed well and we have seen a good team effort so far. I also wish Sachin Tendulkar scores his 100th international century in this match," he added.

Comments
Topics mentioned in this article
Joginder Sharma World Cup 2011 India Cricket Team Pakistan Cricket Team Cricket
Get the latest updates on ICC T20 Worldcup 2022 and CWG 2022 check out the Schedule, Live Score and Medals Tally. Like us on Facebook or follow us on Twitter for more sports updates. You can also download the NDTV Cricket app for Android or iOS.