Bradman scored his 100th first-class ton against India in 1947. Will Sachin Tendulkar return the 'favour' by emulating cricket's greatest batsman in Ahmedabad today? Bradman scored his 100th first-class ton against India in 1947. Will Sachin Tendulkar return the 'favour' by emulating cricket's greatest batsman in Ahmedabad today?

In November 1947, Bradman scored his 100th first-class century during the Australian XI vs Indians XI at the Sydney Cricket Ground. And though it was achieved in a tour game (held as a tune-up for the five-match Test series), Bradman deeply cherished the achievement when he hit India's G Kishenchand to mid-on forÂ  a single.

Landmark ton
Just like Kishenchand is remembered in India as the man who gave Bradman the single to reach a century of first-class hundreds, Ricky Ponting's team will forever be known for the side which presented Tendulkar with his landmark hundred especially if it turns out to be a match-winning effort.

For nearly two decades now, Australia has been in love with the Indian batting master. Neil Harvey (82), a member of Bradman's 1948 team, says Tendulkar ranks closest to the Australian genius.

In a DVD produced by the Australian Broadcasting Corporation called Bradman Centenary Collection which was released a few years after the 2001 passing away of Bradman, Harvey says: "Tendulkar gets down the wicket like Bradman used to so to slow bowling. "Tendulkar's feet movements are so good... he has this ability like Bradman to pick the line and length of the ball probably quicker than anybody else in the game. That is what makes great players so great. He'll be probably closest to Bradman that I've seen."

It is well documented that Bradman told his wife, Lady Jessie in the mid-1990s that he thought Tendulkar batted like him. The great Indian was over the moon. "This is the greatest compliment one can ever get. I only got to see the cassettes (footage of Bradman) when I was 16 or 17. Until then, I was engrossed in my own game. After a few years, you get to know that my style resembles Sir Don's. I mean Â¦ that is something amazing and I was absolutely thrilled about it," Tendulkar tells celebrated Australian cricket writer, Mike Coward in the DVD.

Bradman considered his 100 first-class tons as a heavyweight of an achievement. In his autobiography, Farewell to Cricket, he wrote: "Of all my experiences in cricket, that was my most exhilarating moment on the field. The huge crowd gave me a reception which was moving in its spontaneous warmth." 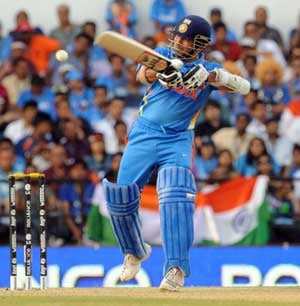 There won't be any benevolence from Ricky Ponting to Tendulkar in Ahmedabad today, but in 1947, there was a bit of it dished out by India captain Lala Amarnath when Bradman was on the threshold of his feat. Historians reckon Amarnath called on batsman Kishenchand to bowl to Bradman because he wanted his milestone century to be scored against India. But Bradman saw it differently.Â  "Finally with my total on 99, Amarnath called up Kishenchand who was fielding on the boundary.

Surprise choice
"He had not bowled before and I had no idea what type of bowler he was. It was a shrewd move, as one could have so easily been deceived, but I treated him with the greatest respect until eventually came a single to mid-on and the great moment had arrived," Bradman wrote.

India endured a 0-4 loss to Australia, but won the tour game (by 47 runs) in which Bradman reached his milestone. Will India achieve the same result as Lala Amarnath's men did in 1947? Over to Motera!

Comments
Topics mentioned in this article
India Cricket Team Australia Cricket Team World Cup 2011 Sachin Ramesh Tendulkar Donald George Bradman Cricket
Get the latest updates on ICC T20 Worldcup 2022 and CWG 2022 check out the Schedule, Live Score and Medals Tally. Like us on Facebook or follow us on Twitter for more sports updates. You can also download the NDTV Cricket app for Android or iOS.