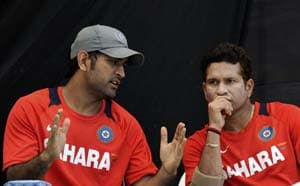 If any of Ricky Ponting's men are relatively weak-willed, compared to the Australians of campaigns past, they have had plenty to help them focus in the days leading up to this quarter-final. An Australian paper reported Cricket Australia were going to discuss Ponting's future as captain. ( Also Read: India batsmen in spotlight)

An English paper reported Ponting was going to jump before he was pushed. An Indian paper reported sinister allegations about Australia's game against Zimbabwe, prompting an angry retraction demand from the ICC. Whether they were planted to drive Australia to distraction is debatable, but none of the stories was substantiated. (Also Read: India start as favourites: Kumble)

Off-field dramas aside, Australia's progress in this World Cup was smooth at first - a comfortable win against Zimbabwe, a smashing one against New Zealand - and then uninspiring, when they laboured against Kenya and Canada. In each of those matches, at least one weakness was evident: a captain struggling for form, a middle order troubled by turn, spinners incapable of striking, and fast bowlers with wonky radars. (Also Read: Bhajji's blood boils against Australia)

All of these frailties were exposed by Pakistan, who ended the legendary unbeaten World Cup run on 34 matches. Australia's successes have been built around the opening partnership of Brad Haddin and Shane Watson, and the energy of Brett Lee. That might not be enough to topple India - but it might, for MS Dhoni's team is far from the shoo-in semi-finalist it was expected to be. (Also Read: Sehwag wants Sachin's 100th ton against Aussies)

Before the World Cup began India's batting line-up was thought to possess the armour of God, their bowling was considered less formidable but effective in home conditions, and the fielding was known to be average. As their campaign played out, it became evident that the armour didn't fit the middle order - there were collapses of 9 for 29 and 7 for 51 - and the bowling, while adequate on helpful surfaces, was mediocre on flat pitches. The fielding has not been average. It has been abysmal. Slow anticipation, slower approaches to the ball, failure to cut off angles, and plain lethargy have allowed opponents to run at will. (Also Read: Johnson to target Sehwag's rib cage)

For a long time during West Indies' chase, it seemed as though India would make the quarter-finals by beating only the three weakest teams of their group, which would have vindicated this forgiving format designed to prevent the upsets of 2007. But Zaheer Khan saved the day, as India expect him to. Zaheer apart, India have relied on Yuvraj Singh for an extraordinary number of wickets, as well as consistent runs in the middle order. The key, though, is at the top, where Sachin Tendulkar and Virender Sehwag have provided tremendous starts. But even if they do it again against Brett Lee and Shaun Tait, it may not be enough. (Also Read: Zaheer continues his Australian opera)

The batting Powerplay was conceived as an asset for the batting team, an aid in the pursuit of fast runs. In the months leading into the World Cup, it began to be a banana skin, with wickets falling as batsmen resorted to rashness during the fielding restrictions. India have slipped spectacularly on it during the tournament, scoring 9 for 154 off 130 balls. During the batting Powerplay, India lost 1 for 32 against England, 4 for 30 against South Africa and 4 for 28 against West Indies, squandering positions of immense strength. Australia haven't mastered it either, making only 4 for 121 off 100 balls. Those five tricky overs could make or break a campaign tomorrow.

If the stakes weren't large enough to fire up Ponting, the talk about his captaincy and retirement will have strengthened his determination to end his form slump with a cathartic performance. Ponting has been dismissed by the short ball - a strength turned weakness - in this World Cup and by spin, a more traditional subcontinent susceptibility. His composure has also been strained. Eight years ago to the day, Ponting ended India's World Cup dream in Johannesburg with a century of frightening brutality. He plans to watch videos of it in the hope that it will help him reproduce something similar in Ahmedabad.

Sachin Tendulkar watched that World Cup slip out of India's grasp as the bowlers conceded 359 in the final. He was then dismissed in the first over of the chase. The Player-of-the-Tournament prize was little consolation. He has the opportunity to write a wonderful script tomorrow - a 100th international century in a victory that will dethrone the World Champions. But cricket, like life, is never perfect.

Virender Sehwag missed the last group game because of an inflamed knee and India are keeping news of his fitness under wraps. He batted on Tuesday and on the eve of the game as well, but Dhoni said they might wait as late as match morning to take a decision on his participation. If Sehwag does not play, India are likely to field the same XI that beat West Indies.

Australia have had an unchanged team since Michael Hussey replaced his brother in the XI, and they are likely to do the same against India. The weakest links have been middle-order batsman Cameron White and offspinner Jason Krejza and potential replacements could be David Hussey and allrounder John Hastings.

"We haven't finalised our 11 yet. We'll have a bit more of a think about things this afternoon, make sure all our players have got through training well, with no injuries or illnesses," Ponting said. "There's a good chance that any of our guys could come in for this game. Coming off a loss last game wasn't ideal for us, and we have to have a look at what we think is going to be the best make-up and balance for the game tomorrow."

Australia played their World Cup opener at Motera, where they started slowly against Zimbabwe before accelerating to a formidable total. Ponting expected tomorrow's pitch to be similar to that one. "It was pretty much what you'd expect for a subcontinent wicket: a little bit slower, spun a bit more in the second innings of the game maybe than the first," he said. "We're going to send our coaches down late tonight to have a look at the ground and see if there's any dew about. I think it's supposed to be 41 [degrees] or something [similar], so it will be nice and hot for the boys out there."

India have lost their last four games in Ahmedabad. They batted first in three of those matches.

Brett Lee has 50 ODI wickets against India, the highest by an Australian bowler. Four of his nine five-wicket hauls are against India.

In 14 ODIs against India in India since 2007, Australia have won eight and lost five.

"Maybe we've just learned to keep our mouths closed a bit more. A lot of that chat hasn't really happened since [Glenn] McGrath and [Shane] Warne went out of the team. Hopefully, our cricket will do the talking on the field tomorrow."
Ricky Ponting on sledging and whether there will be plenty of it during the quarter final.

Comments
Topics mentioned in this article
World Cup 2011 Australia Cricket Team India Cricket Team Cricket MS Dhoni Ricky Ponting
Get the latest updates on ICC T20 Worldcup 2022 and CWG 2022 check out the Schedule, Live Score and Medals Tally. Like us on Facebook or follow us on Twitter for more sports updates. You can also download the NDTV Cricket app for Android or iOS.