India face a nervous wait to find out if opening batsman Virender Sehwag will be fit to face Australia in Thursday's World Cup quarterfinal at the Sardar Patel Stadium. 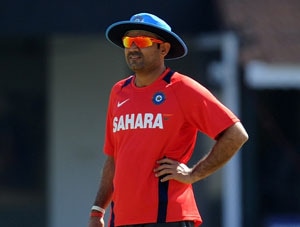 India face a nervous wait to find out if opening batsman Virender Sehwag will be fit to face Australia in Thursday's World Cup quarterfinal at the Sardar Patel Stadium.

Sehwag missed India's final group match, an 80-run win over the West Indies in Chennai last week after suffering an allergic reaction to a painkilling injection in his right knee.

"We are taking a call on Viru in the evening or maybe tomorrow morning before the start of the game," Dhoni said. "Apart from that, all the others are fit."

But a strike rate of over 104 is arguably the most telling statistic, as it is evidence of his consistent ability to get the innings off to a blistering start that leaves the opposition on the defensive.

"It's really good to have Sehwag opening the innings, because if the deliveries are short and to the body or somewhere else, he's the kind of batsman who can make the most of that kind of bowling," Dhoni explained.

Dhoni, himself a hard-hitting middle-order batsman, added: "He can play an aggressive game, change the course of a match in the first five overs and give your team the kind of momentum that is needed."

However, Sehwag has never made an ODI hundred in 27 matches against Australia and he averages a modest 22.65 against the world champions.

If Sehwag is ruled out, India are set to retain Suresh Raina, brought in against the West Indies, and keep Test opener Gautam Gambhir at the top of the order to partner Sachin Tendulkar.

Comments
Topics mentioned in this article
Australia Cricket Team Cricket India Cricket Team Virender Sehwag World Cup 2011
Get the latest updates on India vs South Africa and check out  Schedule, Results and Live Score. Like us on Facebook or follow us on Twitter for more sports updates. You can also download the NDTV Cricket app for Android or iOS.