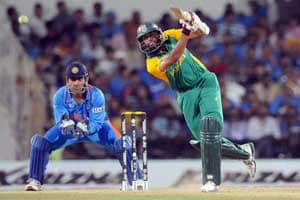 The live streaming of the tie on www.espnstar.com/cwclive exceeded 43 Gbps of video steaming data at its peak in India, according to global content provider 'Akamai' group.

The live web streaming of World Cup has been a huge success ever since it started on February 15 with the warm-up game between India and New Zealand.

Through the first 42 matches, the free live streaming section has received more than 55 million views across the globe, serving 30 million video streams to 17 million unique users ? with the quarterfinals still to come.

The India games so far have accounted for 10.7 million streams peaking at three million for the India v/s South Africa game.

Comments
Topics mentioned in this article
India Cricket Team World Cup 2011 South Africa Cricket Team Cricket
Get the latest updates on IPL 2021, check out the IPL 2021 Schedule and Indian Premier League Live Score . Like us on Facebook or follow us on Twitter for more sports updates. You can also download the NDTV Cricket app for Android or iOS.