India captain Mahendra Singh Dhoni has praised coach Gary Kirsten for a "fantastic job" ahead of what could be the South African's final game in charge of the national side. 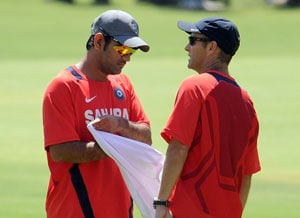 India captain Mahendra Singh Dhoni has praised coach Gary Kirsten for a "fantastic job" ahead of what could be the South African's final game in charge of the national side.

With former Proteas batsman Kirsten having confirmed he will return to South Africa to spend more time with his family when his contract expires after the World Cup, this match could bring down the curtain on his four-years in charge.

Even if India make it through to the final that would give Kirsten, who played 101 Tests and 185 one-day internationals for South Africa, a maximum of three more matches at the helm.

The deliberately low-key Kirsten was appointed not long after India's humiliating first round exit at the 2007 World Cup under high-profile Australia coach Greg Chappell.

But under the 43-year-old Kirsten they have risen to number one in the Test rankings and number two in one-dayers.

Dhoni, speaking on the eve of the crunch match against Australia, said of Kirsten: "The kind of character he is, the way he has managed the Indian dressing room, not to forget the 15 members who are part of the squad all of them are big superstars and all of them have a big fan following in India.

"The way he has managed each and every individual and I think he has done a fantastic job. It reflects as to how we have done well on the field. I think he is a fantastic gentleman to be associated with."

India batting great Sachin Tendulkar had previously praised Kirsten, by saying: "Gary has been instrumental in making our batters play plenty of deliveries in the practice session. During net practice, he himself bowls thousands and thousands of balls.

"He has been an important member of the Indian squad along with the other support staff. I have enjoyed my game under him. He is really putting in a lot of effort."

Comments
Topics mentioned in this article
Cricket Gary Kirsten India Cricket Team World Cup 2011 MS Dhoni Yuvraj Singh Suresh Raina
Get the latest updates on ICC T20 Worldcup 2022 and CWG 2022 check out the Schedule, Live Score and Medals Tally. Like us on Facebook or follow us on Twitter for more sports updates. You can also download the NDTV Cricket app for Android or iOS.