India give nets a miss, but recreational activities continued

With issue related to injuries more or less sorted out, the Indian cricket team on Friday gave the nets at the National Cricket Academy a miss, but the daily dose of recreational activities continued unabashed inside the Chinnaswami Stadium ground here. 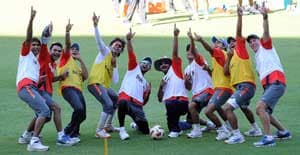 With issue related to injuries more or less sorted out, the Indian cricket team on Friday gave the nets at the National Cricket Academy a miss, but the daily dose of recreational activities continued unabashed inside the Chinnaswami Stadium ground here.

To start with, Gary Kirsten's wards played football and that was followed by an hour of volleyball, as they seemed relaxed ahead of Sunday's group B World Cup clash against giant-killers Ireland.

The likes of Zaheer Khan, Munaf Patel, Yusuf Pathan and Yuvraj Singh then rolled their arms over on the practice wicket for some time, while Ashish Nehra and S Sreesanth indulged in stretching exercises.

Part of the session was devoted to slip catching and but there were no throw-downs.

But, unlike Thursday's innovation, when Mahendra Singh Dhoni's men, on either side of a football game, underwent two unique drills, things were pretty much back to the basics on Friday.

Divided into two groups of six each, the players on Thursday lobbed tennis balls into three buckets placed at a distance of 10 feet each. Within the group, four threw while two relayed back the rebounds.

Surprisingly, the focus on Friday was not just on Nehra, who is said to have recovered from a back spasm, and is certain to play on Sunday. Though the lanky seamer didn't bowl, there are enough indications that he would be played against the high-flying Irish.

Thought to be an easy outing for the hosts, the Ireland match gained significance after the associate nation rode on Kevin O'Brien's qucikest Cup ton to stun England.

But the mood within the India camp was relaxed. Harbhajan and Yuvraj found the net a couple of times even as Sreesanth and Suresh Raina fluffed a few chances when playing football.

Ireland had a net session in the morning and some of them were also seen practicing the pull shot near the NCA nets.

Comments
Topics mentioned in this article
World Cup 2011 India Cricket Team Anil Kumble Ireland Cricket Team M.Chinnaswamy Stadium, Bengaluru Cricket
Get the latest updates on ICC T20 Worldcup 2022 and CWG 2022 check out the Schedule, Live Score and Medals Tally. Like us on Facebook or follow us on Twitter for more sports updates. You can also download the NDTV Cricket app for Android or iOS.