With the high-voltage semi-final clash between India and Pakistan scheduled on Wednesday, the Indian team had a light training session playing football and volleyball while Pakistani players enjoyed an extensive net session at the PCA stadium, on Sunday. 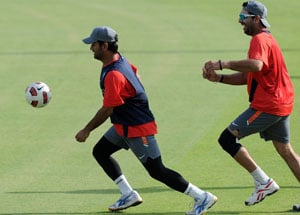 With the high-voltage semi-final clash between India and Pakistan scheduled on Wednesday, the Indian team had a light training session playing football and volleyball while Pakistani players enjoyed an extensive net session at the PCA stadium, on Sunday.

The Indian team led by skipper M S Dhoni reached the stadium late in the afternoon as the captain and coach Gary Kirsten straightaway went to have a look at the pitch. While the two were having a close look, pitch curator Daljit Singh was also around.

Off-spinner Harbhajan Singh, who was away to his hometown Jalandhar on Saturday, about 150 km from Mohali, joined his teammates in the evening when they were playing volleyball. Thereafter, a friendly football match was played for nearly 90 minutes between Dhoni's camp that included Virat Kohli, S Sreesanth, Ashish Nehra and Virender Sehwag as goalkeeper on one side and the opposite team that had Sachin Tendulkar, Yuvraj Singh, Yusuf Pathan and Gautam Gambhir as goalkeeper.

Initially, Tendulkar kept knocking at one end while the other teammates were playing football, but he joined his mates soon. Later, the team did some fielding practice. After the session was over, Dhoni, Nehra, Munaf and few others including Harbhajan played volleyball for a while before winding up.

Earlier in the day, the Pakistani team led by Shahid Afridi played football, did some warm-up exercises while some teammates including Afridi and Misbah-ul-Haq could be seen wearing boxing gloves and exchanging punches. Later on, they sweated it out in the nets, with the entire training session lasting more than three hours.

Pakistan coach Waqar Younis and manager Intikhab Alam were present and kept a close watch during the practice session. Younis Khan, Afridi, Misbah, Mohammad Hafeez were among the batsmen who sweated it out while Umar Gul, Wahab Riaz, Afridi looked in good knick among the bowlers.

Speedster Shoaib Akhtar, who may or may not be included for the semi-final among the playing XI, seemed to have a slight limp in his left leg, though he sent down a few deliveries during the practice.

Pakistan bowlers have also been using a strip during training session, which Misbah during the course of his media interaction, said helps the ball come on quickly to the bat, indicating that it would help them get used to the slightly bouncy conditions of the Mohali track.