The nerve-wrecking tied match between India and England in the ongoing cricket World Cup delivered a peak rating of 29.7 TVRs in six metros for official broadcaster ESPN STAR Sports.

"The epic tied match between India-England has created new records not just on the field but off the field as well. 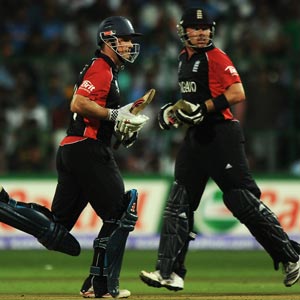 The match delivered a peak rating of 29.7 TVRs in top 6 metros according to the research agency TAM," the channel said in a statement. The match, in which England snatched a tie by levelling the mammoth target of 338 set by India, averaged 17.3 TVRs in six metros for which the data is available.

"This is the highest rating any ODI has got in the last two ICC Cricket World Cups. Earlier, India vs. Bangladesh tie had rated an impressive 10.3 TVR," the channel claimed.

Comments
Topics mentioned in this article
World Cup 2011 Cricket India Cricket Team Salman Butt
Get the latest updates on ICC T20 Worldcup 2022 and CWG 2022 check out the Schedule, Live Score and Medals Tally. Like us on Facebook or follow us on Twitter for more sports updates. You can also download the NDTV Cricket app for Android or iOS.