India defeated Pakistan - by 8 wickets (D/L method) - for the first time ever in any edition of Champions Trophy. It was a solid performance through the course of a rain-hit clash. 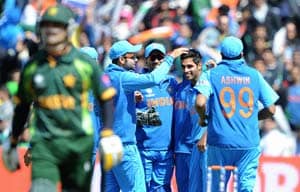 It may have been a dead rubber with India already in the semifinals and Pakistan out of the tournament. Both teams, however, looked intent on fighting hard. The Men in Green however came out second best in a match that was repeatedly threatened and curtailed by rain. Here is a look at some of the key moments from the match that contributed towards the eventual result.

* The track and the weather: Most regarded this as a track on which batting first would be the right decision. India skipper MS Dhoni though opted to field under a cloudy sky. It proved to be a good decision as eventual downpour caused further stutter to an already rickety Pakistan's innings. After an interval of over two and a half hours, Pakistan tried to rush the scoring in a rain-reduced 40 overs a side match. Match resumed after 19 overs and Pakistan folded two balls short of the full quota of stipulated overs.

* Pakistan's continuing batting woes: This team scored 167 against South Africa and 170 vs West Indies. At least opener Nasir Jamshed, apart from Misbah, looked in some form with a half century coming into this match. On Friday, he fell early to Bhuvneshwar (2 off 9 in the third over). The rest of the batting caved in despite a few others getting some starts including Asad Shafiq (41 off 57). There was a need for someone to play aggressively and yet play the long innings. That did not happen.

* Spin and seam, India's deadly cocktail: At 23, Bhuvneshwar Kumar responds to pressure by shining bright. Against Pakistan on Saturday, he shone brightest with not just two wickets but a stingy economy of 2.37 from his eight overs - good enough to be declared the man of the match. He was hardly wayward in his line and length and this helped him force Pakistan batsmen to either make mistakes or tread too cautiously for their own liking. Once he was given a respite, Ravindra Jadeja and R Ashwin were brought in ensuring that relief of Pakistan only came when the skies opened up.

* Dhawan's resilience, Kohli's form: Pakistan's bowing has been a minor saving grace for the side but against Shikhar Dhawan, it fell flat. An orignal target of 168 from 40 overs could have been defended yet if early inroads were made. With this southpaw to deal with at the top, it never happened. Dhawan was a pillar of resistance and kept the scorecard ticking without much risk. Even when he eventually fell on 48, Virat Kohli (22 with 3 boundaries)Â  took over and showed he is ready for the business end of the tournament.

At the beginning of the match, the Indian team was the favourite to win Saturday's match. In the end, it was a culmination of the reasons above which helped the men in blue enter the semis without a single blemish.