Kenya wicketkeeper Maurice Ouma on Saturday said the ICC's decision to limit the number of teams in the 2015 World Cup to 10 will act as a hindrance in the governing body's effort to make cricket a global sport. 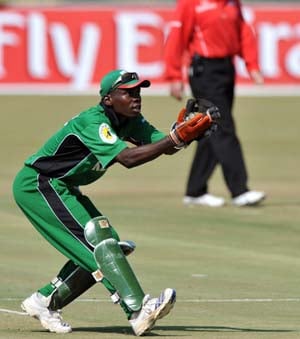 Kenya wicketkeeper Maurice Ouma on Saturday said the ICC's decision to limit the number of teams in the 2015 World Cup to 10 will act as a hindrance in the governing body's effort to make cricket a global sport.

Asked about his views on ICC's decision to limit the number of teams in the 50-over World Cup, Ouma said, "ICC's decision (to leave out minnows from 2015 World Cup) doesn't make sense."

"They (ICC) have pumped in huge money in its High Performance Development Programmes. With this decision, their entire programme will go in waste," he said after team training ahead of their World Cup match against Canada on Monday.

The middle-order batsman said the ICC should work towards creating more opportunities for the minnows to play top cricket playing nations on a consistent basis.

"The associate nations should be given more opportunity to play Test playing countries on regular basis and not once in four years," said Ouma, who quit as Kenya captain only last year.

"We really deserve to be there considering the fact that we consistently played in the last five World Cups. We have qualified for the World Cups more than any other nation," he added.

Having put up shoddy performances in their opening three games, Ouma knows that Kenya has not helped the minnows' cause but said his side will come back strongly in their remaining games in the mega-event.

"We had a disappointing first three games but we are looking to bounce back. Our initial target was quarter-finals but now we at least want to win two out of our three matches (against Canada and Zimbabwe) before facing Australia. We are taking one game at a time," he said.

Asked about the mood within the camp after the three consecutive losses and reports of rift within the team, Ouma said, "Motivation is always there when you wear the national jersey despite what all has happened."

Kenya take on another minnows of world cricket Canada in a group A encounter at the Feroze Shah Kotla on Monday and Ouma said the African nation was pumped up for the match.

"We are pretty much geared up for the match. Canada's bowling is something which is not new to us. We are quite familiar with their bowling attack because we have played against them quite a few times last year."

The minnows tag in world cricket, notwithstanding, Kenya incidentally were the semi-finalist of 2003 World Cup in South Africa, where they eventually lost to India.

But since then Kenyan cricket has witnessed sharp decline and Ouma understandably is a disappointed man.

"As a country we didn't materialise our success of 2003. The board and the government should have taken heart from our performance in 2003 and should have worked together.

"After 2003, we also lost five of our senior players. Once they retired Kenya went through a transition period. At the moment we are in a rebuilding phase," he reasoned.

"To hear people still call us minnows after reaching the semis of 2003 World Cup is disappointing."

He also said that cricket is not a popular sport in Kenya but slowly and steadily it is gaining ground there.

"Obviously, it is not as big as India. Our number one sport is athletics and football followed by cricket and rugby.

"Over the years the Board has done a lot to promote cricket in the grassroot level. All the players in this team are fully contracted professional players," Ouma said.

"The board is also trying to tie up with 2-3 companies, so the prospect of cricket in Kenya is good," he added.

Comments
Topics mentioned in this article
World Cup 2011 West Indies Cricket Team Netherlands Kenya Cricket
Get the latest updates on ICC T20 Worldcup 2022 and CWG 2022 check out the Schedule, Live Score and Medals Tally. Like us on Facebook or follow us on Twitter for more sports updates. You can also download the NDTV Cricket app for Android or iOS.