The hihglights from the power-packed Group A match between New Zealand and Pakistan at Pallekele. 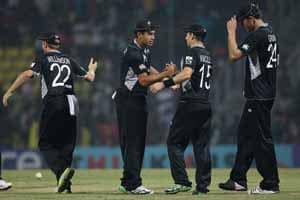 Following are the highlights of the Group A match between Pakistan and New Zealand:

# New Zealand are at the top of the table in Group A, having better net run-rate than Pakistan.

# New Zealand's triumph by 110 runs is their biggest at the world cup against a Test-playing country, obliterating the 52-run win over Pakistan at Birmingham on June 11, 1983.

# Abdul Razzaq and Umar Gul were associated in a 66-run stand for the ninth wicket - Pakistan's highest at the world cup, eclipsing the 39 (unbroken) between Wasim Bari and Zaheer Abbas against England at Lord's on June 13, 1983.

# Abdul Razzaq, by completing his 5,000 runs, has become the fourth all-rounder to accomplish the double of 5000 runs and 200 wickets in ODIs - the others are Jacques Kallis, Sanath Jayasuriya and Shahid Afridi.

# Abdul Razzaq (62) has become the first Pakistani player to post a fifty at number eight at the world cup.Â  He is the tenth overall to accomplish the feat.

# Abdul Razzaq's aforesaid knock is the second highest by a number eight batsman at the world cup, next only to the 72 not out by Heath Streak for Zimbabwe against New Zealand at Bloemfontein on March 8, 2003.

# Razzaq's second fifty at the world cup is his 23rd in ODIs.

# Umar Gul (3/32) has produced his best performance at the world cup.

# Ross Taylor's first MOM award against Pakistan is his seventh in ODIs.

# Pakistan's defeat by 110 runs is their second biggest by runs margin at the world cup, next only to the 112-run loss to England at Cape Town on February 22, 2003.

# New Zealand have won their second game in eight matches against Pakistan at the World Cup.Â  They had won the Edgbaston game by 52 runs against Pakistan on June 11, 1983 before losing the next six in a row between June 20, 1983 and June 16, 1999.

# New Zealand's total is their highest against a Test-playing side at the world cup, eclipsing the 286 for nine against Australia at Chennai on March 11, 1996.

# Ross Taylor has become the first player to register a hundred on his birthday in the history of the world cup.

# Taylor is one of the four batsmen to post a birthday hundred in ODIs - the first three being Vinod Kambli, Sachin Tendulkar and Sanath Jayasurya.

# Taylor's tally of seven sixes is a record by a New Zealander at the world cup, surpassing Scott Styris' six sixes against Sri Lanka at Bloemfontein on February 10, 2003 - 141 off 125 balls.

# Taylor's tally of seven sixes has been bettered only by three batsmen at the world cup - Ricky Ponting (2003), Adam Gilchrist and Imran Nazir in 2007 - all three hit eight sixes in a world cup innings.

# Taylor (131 not out) has recorded a career-best in ODIs - his first world cup hundred.Â  He has posted his fourth hundred in ODIs - one each against Australia, Pakistan, Sri Lanka and Bangladesh.

# Thirty runs (Taylor 28 and wides 2) were scored in the 49th over - a New Zealand record in ODIs/world cup.

# Jacob Oram and Martin Guptill were involved in a stand of 85 for the seventh wicket - New Zealand's highest at the world cup, surpassing the 83 between Stephen Fleming and Chris Harris against Pakistan at Derby on May 28, 1999.

# New Zealand have recorded thirteen sixes - their highest against Pakistan in ODIs, eclipsing the twelve during their total of 311 for seven at Auckland on February 5, 2011.

# New Zealand's tally of thirteen sixes is their highestÂ  at the world cup, bettering the 12 recorded against Kenya at Gros Islet on March 20, 2007.