Statistical highlights of the final Group B match between India and the West Indies. 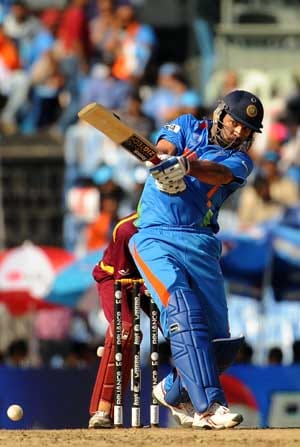 Statistical highlights of the final Group B match between India and the West Indies.

# Yuvraj has taken 9 wickets in the present competition at an average of 25.22 - his best in a series/competition, bettering the 8 at 27.75 runs apiece in seven matches in the Coca Cola Cup in 2001 in Sri Lanka.


# India have registered their biggest win (80 runs) over West Indies in the World Cup, surpassing the 43-run win in the 1983 final at Lord's.


# Ravi Rampaul is the first bowler to take five wickets in a world cup innings at Chennai, surpassing the four for 15 by England's Stuart Broad against South Africa on March 6, 2011.

# Devon Smith has recorded his fifth fifty in ODIs - his first against India.

# Zaheer took his tally of wickets to 15 at 14.86 runs apiece in six games - the second highest in the present competition, next only to Shahid Afridi's 17 at 11.47 runs apiece.


# India (268) have posted their second highest World Cup total at Chepauk, Chennai - the highest being 269 against Australia on October 9, 1987


# Yuvraj's third hundred against West Indies is his 13th in ODIs.


# Yuvraj has registered 20th hundred for India at the World Cup


# Yuvraj and Virat Kohli put on 122 for the third wicket - India's highest against West Indies at the World Cup,


# Yuvraj is the first Indian all-rounder to register a hundred and capture two wickets in the same game at the World Cup.

# Yuvraj has managed to total 284 in six matches at an average of 94.66 apart from capturing 9 wickets at 25.22 runs apiece in the present edition of the World Cup.

# Yuvraj is the first batsman in the present competition to register a hundred and three fifties.

# On his World Cup debut, Ravi Rampaul (5/51) has bowled brilliantly to take five wickets - his career-best in ODIs.

# Rampaul's previous best bowling figures in ODIs were 4 for 37 against India at Kingston on June 28, 2009.


# Andre Russell has posted his first duck in ODIs.