Statistical highlights of the Australia vs Canada group A match of the cricket World Cup in Bangalore on Wednesday. 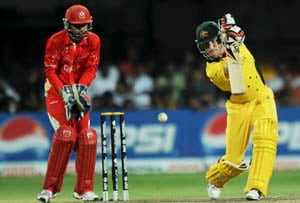 Statistical highlights of the Australia vs Canada group A match of the cricket World Cup in Bangalore on Wednesday.

# Brett Lee (4/46) has registered his best bowling performance on Indian soil, bettering the three for 37 against India at Hyderabad on October 5, 2007.

# Lee has claimed four or more wickets in a world cup game - his best ever being 5 for 42 against New Zealand at Port Elizabeth on March 11, 2003.

# With their 183-run stand, Watson and Haddin have set a first wicket partnership record for Australia at the world cup, eclipsing the 182 between Rick McCosker and Alan Turner against Sri Lanka at The Oval on June 11, 1975.

# Canada (77/1) have posted their best performance in the mandatory batting powerplay in the present tournament.

# Bagai and Surkari were involved in a stand of 68 for the third wicket - Canada's best partnership for any wicket against Australia.

# Canada have lost both their world cup games to Australia in the world cup.

# Hiral Patel (54 off 45 balls) has posted his highest score in the world cup. The said innings, in fact, is his career best in ODIs, eclipsing the 43 off 73 balls against Afghanistan at Voorburg on July 1, 2010.

# Patel became the first batsman from Canada to register a fifty against Australia in ODIs.

# Ashish Bagai has batted brilliantly in his last three innings at the world cup - unbeaten 64 against Kenya at Delhi, followed by 84 against New Zealand at Mumbai and 39 against Australia at Bangalore.

# Jimmy Hansra has amassed 215 at an average of 43.00 in six games, including two fifties, in the present competition.

# For the first time in their world cup history, two Canadian batsmen - Hansra and Bagai have totalled 200 runs in the same world cup tournament.

# Watson's match-winning knock (94 off 90 balls) is his highest at the world cup, surpassing the 79 against Zimbabwe at Ahmedabad on February 21, 2011. The said knock is his 22nd fifty in ODIs.

# Watson has been dismissed in the nervous nineties in ODIs - both in India - 94 against Canada at Bangalore and 93 against India at Hyderabad on November 5, 2009. # Brad Haddin (88 off 84 balls) has posted his third fifty in a row in the present competition.

# Watson has received his 13th Man of the Match award -his second at the world cup.

# Watson has recorded seven sixes - the most by an Australia in the present tournament.

# The 183-run stand is the best for any wicket at M Chinnaswamy Stadium, Bangalore, surpassing the 170 for the third wicket between Ian Bell and Andrew Strauss for England against India on February 27, 2011.

# Harvir Baidwan has taken 13 wickets at an average of 23.61 in six games - the highest by a Canadian bowler in a world cup competition.

# Haddin and Watson have managed to reach over 400 in four innings - 415 at an average of 103.75 for the opening wicket, including two partnerships of 100-plus and one fifty-plus.

# Only Martin Guptill and Brendon McCullum have averaged slightly higher than Haddin and Watson in the present world cup - 319 (ave. 106.33) in five innings.

Comments
Topics mentioned in this article
Ashish Bagai World Cup 2011 Cricket
Get the latest updates on ICC T20 Worldcup 2022 and CWG 2022 check out the Schedule, Live Score and Medals Tally. Like us on Facebook or follow us on Twitter for more sports updates. You can also download the NDTV Cricket app for Android or iOS.