The International Cricket Council (ICC) has carried out a scrutiny of the Australia and Zimbabwe World Cup match played in Ahmedabad after Australian openers Shane Watson and Brad Haddin batted slowly in the first 10 overs. 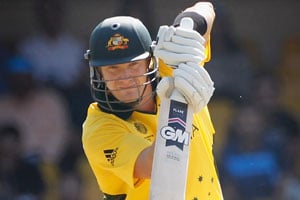 The International Cricket Council (ICC) has carried out a scrutiny of the Australia and Zimbabwe World Cup match played in Ahmedabad after Australian openers Shane Watson and Brad Haddin batted slowly in the first 10 overs.

The two openers scored just 28 in 11 overs and 53 in 15 overs in a match that Australia eventually won comfortably but the slow rate of scoring in the first two overs was scrutinized by the ICC anti-corruption and security unit.

Sources aware of developments said the ICC ACSU had carried out a quiet review of the match after questions were raised over the slow start taken by Watson and Haddin.

With the spectre of spot-fixing now looming over international cricket following the bans on three Pakistani players for spot-fixing last year on the England tour, sources said the ICC ASCU was keeping a vigilant eye on all matches in the World Cup and the slow start by the Australian openers caught their attention.

"They are taking no chances at all and all matches are under the scanner for possible indications that any spot-fixing has taken place," one source said.

Australian team coach Tim Nielsen has defended his openers saying they played slowly according to the situation.

"I thought they played well in game one. Everyone had this perception that they went slowly. But if Zimbabwe were going to be competitive against us, they needed to take early wickets with their spinners. We're playing the way we think is the right way to play," said Nielsen after the match.

Pakistan former test captain, Rashid Latif has already expressed fears that the format of the World Cup has opened a window for bookmakers to try to corrupt players in the tournament since most of the top teams are certain to make the all-important quarter finals from the group matches stage.

In spot-fixing bookmakers take bets on particular moments and stages of a match for example how many runs would be scored by a team in five overs or after ten overs and so on or in a certain over how many runs will be scored or if it will be a maiden. Muhammad Asif and Muhammad Aamir were hauled up after being found guilty of deliberately bowling no-balls during the fourth test against England at Lords last year.

Plenty of fuss was also raised over the India and England match after former Australian leg-spinner Shane Warne correctly tweeted seven hours before the start of the match that it would be a tie.

England skipper Andrew Strauss claimed that Warne had shown he was a cricket genius with his correct prediction but others also observed that it was strange how one could predict a tie so early before a match.

Comments
Topics mentioned in this article
Australia Cricket Team World Cup 2011 New Zealand Cricket Team Pakistan Cricket Team Cricket
Get the latest updates on ICC T20 Worldcup 2022 and CWG 2022 check out the Schedule, Live Score and Medals Tally. Like us on Facebook or follow us on Twitter for more sports updates. You can also download the NDTV Cricket app for Android or iOS.