Pakistan, set 235 to win, finished on 167 all out after never really recovering from the loss of two early wickets to South Africa debutant Chris Morris, despite captain Misbah-ul-Haq's 55. 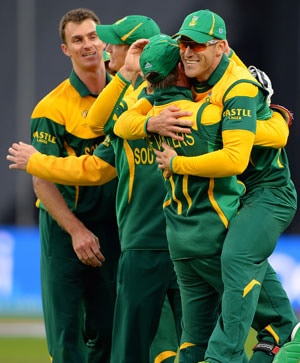 Like a hot air balloon that had its burner turned off unexpectedly mid flight, Pakistan imploded gently against South Africa, slumping to a 67-run loss in a game they had set on fire in the first half with intelligent bowling and sharp fielding. A typically canny effort on the field ensured that Pakistan kept South Africa down to 234 for 9 on a sluggish, dry pitch at Edgbaston, but, having done the hard work, they then gave the game away, inch by inch, when it was their turn to chase an eminently gettable total. With that, Pakistan's hopes of making the final four all but evaporated, even with two games left to play in the league phase.

The game was set up in the first half, almost entirely by Pakistan, who, despite losing the toss, ensured that they won the key moments. South Africa took the sensible approach, with Colin Ingram and Hashim Amla, the openers, seeing the new ball off. But, before the partnership could really hurt Pakistan, it was broken through spin in the 15th over, with 53 on the board. (See: Match in Pics)

The onus then fell on Amla, who builds an innings as calmly and calculatingly as anyone in the game. An early chance was offered, when Amla slashed hard at Mohammad Irfan to present Umar Amin with an opportunity at point. Going one-handed, Amin let Amla off on 7, and he would then have to watch as Amla added 49 with Faf du Plessis. (Read: Hashim Amla has highest average in One-Day Cricket)

But, du Plessis toe-ended a pull to cover, and once again Amla was left to pick up the pieces, this time with AB de Villiers. When de Villiers pushed forward to Shoaib Malik, but picked the short ball early and eased onto the back foot to pull the ball for a crisp six over midwicket, there were still enough overs left in the innings to shift a gear up. de Villiers called for the batting Power Play and Amla, being the set batsman, made the first move.

Putting away the erudite cover drive and shelving the lissome late cut, Amla unfurled the reverse sweep off Saeed Ajmal. It looked wrong, somehow out of place, like a professor of theology attempting to keep up with his punk rocker son by sporting a Mohawk, and the result was unflattering. The ball ballooned off glove and short third-man completed a tumbling catch to end Amla's innings on 81.

A key moment in the innings had come up, and South Africa's most accomplished batsman had made the wrong choice, even as an enthusiastic Pakistan team pounced.

The pattern would repeat 9.1 overs and 31 runs later when de Villiers (31), fell - literally and figuratively - after being sent back by JP Duminy when attempting a non-existent single. Misbah-ul-Haq, discovering speed in legs that defied his status as the oldest player in the Champions Trophy 2013, ran across and broke the stumps. Again, just when South Africa needed one of their big guns to go boom, it went bust.

The inexperienced lower middle-order, perhaps lacking the nous to handle a tight situation, found itself in a jam as Pakistan lifted themselves. All of a sudden there were fielders everywhere, and each half-chance was converted ruthlessly. Only 51 runs came off the last 10 overs, and South Africa went from being 122 for 1 to 239 for 9 from their 50 overs.

The target, even with plenty of spin to contend with in the absence of Dale Steyn and Morne Morkel, should not have been beyond Pakistan. But, a line-up hamstrung by the absence of players of the calibre of Younis Khan approached the chase as though the target was 140 rather than 240. Nasir Jamshed, one of the brightest young batsmen in the game, batted as though the selectoral sword hung only inches over his neck, curbing every natural instinct and defending deliveries he should have put away with one hand tied behind his back. Imran Farhat continued to disappoint - the only century of his 12-year ODI career came a decade ago - losing his off stump to the debutant Chris Morris.

Jamshed was joined by Mohammad Hafeez, and the two crawled so deep into a shell that their six-over stand yielded just 14 runs. Hafeez was late on a compulsive pull shot, and gave Morris his second wicket in the middle of a miserly spell.

Shoaib Malik, who ate up 29 balls to score 8, defended imperfectly against Duminy and when the ball slid back onto the stumps to dislodge the bails, it was representative of Pakistan's approach. Even in defence, trying to discard all risk, Pakistan were shooting themselves in the foot.

Jamshed, who had scored his runs at a Test-match strike rate of 55.26, presented Lonwabo Tsotsobe with a straightforward return catch off a slower ball. Jamshed, who made 42, returned to the dressing-room with Pakistan on 86 for 4 in the 28th over.

All hopes then fell to Misbah, whose unbeaten 96 had gone in vain in a low-scoring match against the West Indies, but the required run rate climbed steadily. South Africa's bowlers, allowed to settle into a rhythm, were well backed up on the field, and Umar Amin fell for a painful and ultimately pointless 16 off 20 balls. Trying to buck the trend, Kamran Akmal flashed hard at the second ball he faced, but only gave the point fielder catching practice.

Misbah, reprising his performance as the lone gunslinger, once targeted the straight boundary successfully, but when he pulled Tsotsobe straight to Amla at midwicket, Pakistan's chase was dead in the water. Misbah, with 55, once again topscored for his team, who slid to 167 all out and a 67-run defeat.

Comments
Topics mentioned in this article
Cricket ICC Champions Trophy 2013 Dale Steyn AB de Villiers Sreesanth Morne Morkel Aaron Phangiso Asad Shafiq World Cup 2011
Get the latest updates on India vs Australia Series, check out the India vs Australia Schedule for 2020-21 and Ind vs Aus live score . Like us on Facebook or follow us on Twitter for more sports updates. You can also download the NDTV Cricket app for Android or iOS.