I played an irresponsible shot: Afridi

Pakistan might have halted Australia's 34-game winning streak in the World Cup on Saturday but captain Shahid Afridi was angry with his own "irresponsible" batting effort in the game. 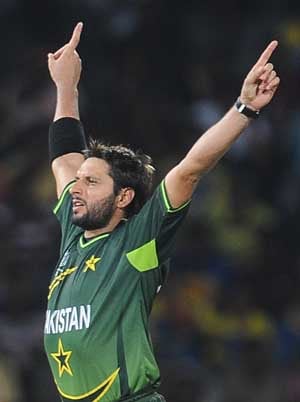 Pakistan might have halted Australia's 34-game winning streak in the World Cup on Saturday but captain Shahid Afridi was angry with his own "irresponsible" batting effort in the game.

Chasing a modest 178 for victory, Afridi (2) once again flopped with the bat as he skied one to Brett Lee at long-on off Jason Krejza with Pakistan still needing 38 runs to win.

"Don't ask me. It was an irresponsible shot from me at that stage," Afridi said after Pakistan defeated title holders Australia by four-wickets in a low-scoring but pulsating Group league match to top Group A.

The Pakistani captain lauded his bowling attack for restricting Australia under the 200-run mark. "We made some plans for Australia and I am happy that we stuck to that. The way (Umar) Gul and (Abdur) Rehman started was fantastic. The credit (for this victory) goes to the bowlers," Afridi said.

He also praised young Asad Sahfiq (46) and Umar Akmal (44 not out) for their gritty performance with the bat against the mighty Australian attack.

"They are doing a great job. Both Asad and Umar played mature cricket," Afridi said.

"It was certainly good to have a tough game but we didn't do us favours. Our batting was ordinary," Ponting said. "The wicket was certainly better that 177. We should have got lot more runs," he said.

He, however, said that he was worried about Australia's batting department.

"I am not that worried about. We have been working hard and it was just a one-off day," Ponting said.

He also praised pace spearhead Brett Lee for his impressive four for 28 run spell that brought Australia back into the match after the unimpressive display with the bat. "He (Lee) bowled really well. He started particularly well and got breakthroughs for us when we wanted," Ponting said about Lee.

Man-of-the-match Umar Akmal, who played a precious 44-run unbeaten innings under trying circumstances during Pakistan's chase, said at no point of time he felt pressure. "We believed that we can win against Australia. I didn't have any pressure," he said. "Asad played really well but was little unlucky."

Comments
Topics mentioned in this article
Australia Cricket Team Cricket New Zealand Cricket Team Pakistan Cricket Team Shahid Afridi World Cup 2011
Get the latest updates on ICC T20 Worldcup 2022 and CWG 2022 check out the Schedule, Live Score and Medals Tally. Like us on Facebook or follow us on Twitter for more sports updates. You can also download the NDTV Cricket app for Android or iOS.