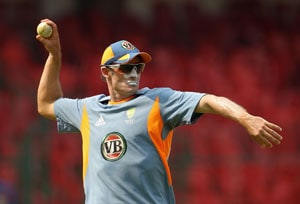 India's Yuvraj Singh, speaking after an 80-run win over the West Indies that set-up the quarterfinal clash with the defending champions, said: "Australia are a top side, they've won three successive World Cups but Shane Warne, Glenn McGrath, Adam Gilchrist and Matthew Hayden are not there.

"If we can get into their weaknesses, we can win the quarterfinal."

But Hussey said the way Australia had won a one-day series 4-2 in India in 2009 without Gilchrist, who scored a century in the 2007 final, opener Hayden and bowling stars McGrath and Warne, was proof local conditions held no fears.

"We've won quite a few series against India in one-day cricket over here in the last few years without the likes of McGrath, Warne, Gilchrist and Hayden," said Hussey.

"We can come into this game with a lot of confidence, because we have played well against India in Indian conditions in the last few years, and won some very tough series."

However, the last one-day series on Indian soil between the two sides saw India emerge 1-0 winners although two matches out of three were washed out.

Australia go into Thursday's quarterfinal on the back of a four-wicket defeat by Pakistan that ended their 34-match unbeaten run at the World Cup.

But Hussey backed Australia's big-game temperament to emerge, saying: "I'm sure the ground will be a packed house and it will be a great environment to play our best cricket."

For the first time since the 1996 World Cup, sides will need to win three successive knockout matches to lift the trophy and Hussey said: "The teams that win their quarterfinal - and win well - can take that confidence and momentum into the semifinals.

"This is a huge game for us. We believe that if we can beat India then we have a great chance of going all the way."

"I hope so, because we have to face them in the nets and (since) they don't mind giving us a few short-balls they can certainly give some to the Indians as well.

"They're bloody fast bowlers so it can be very difficult to play and let's hope they have the Indians on the hop."

Comments
Topics mentioned in this article
Australia Cricket Team World Cup 2011 Michael Hussey Cricket
Get the latest updates on ICC T20 Worldcup 2022 and CWG 2022 check out the Schedule, Live Score and Medals Tally. Like us on Facebook or follow us on Twitter for more sports updates. You can also download the NDTV Cricket app for Android or iOS.