John Davison goes into his third and final World Cup basking in memories of having once ripped up the record books and with the praise of Shane Warne ringing in his ears. 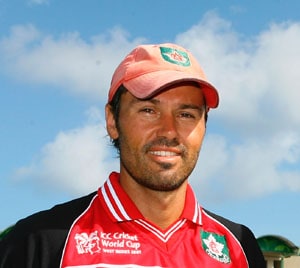 John Davison goes into his third and final World Cup basking in memories of having once ripped up the record books and with the praise of Shane Warne ringing in his ears.

The 40-year-old, the tournament's oldest player, has the formidable task of helping Canada to what would be a stunning upset of 1996 champions Sri Lanka here on Sunday.

But upsets are his stock in trade. On a famous day at Centurion in 2003, he smashed a century off just 67 balls against the West Indies.

It was a World Cup record which was surpassed by Matthew Hayden four years later when the burly Australian made a ton off 66 balls against South Africa at St Kitts.

"I have played my best cricket when I have enjoyed myself. We go into these tournaments as massive underdogs and with minimal expectations from the cricketing public," Davison told the Toronto Star.

"This is the perfect environment to show our skills against the best in the world."

Davison, who also smashed the third-fastest World Cup fifty against New Zealand in the 2003 World Cup, is something of a cricketing refugee.

Born at Campbell River in British Columbia in 1970, his family moved to Australia when he was young and his love of cricket gained him entrance into the Australian Cricket Academy.

He was good enough to play grade cricket for Victoria and South Australia while coaching in Canada during the Australian winters.

He became Canada's captain in 2004 and the following year, he made more history by taking 17 for 137, the best since Jim Laker in 1956, and hitting 84 as Canada beat USA by 104 runs in the Intercontinental Cup.

Davison played his last match for South Australia in 2005 but has maintained his high levels for Canada, making another half-century from 31 balls against New Zealand in the 2007 World Cup.

It's an ability fostered by early confidence despite his doubts ahead of the 2003 World Cup.

"The defining moment for me, that gave me a lot of confidence was running into Shane Warne in Johannesburg where he told me he had just written an article in an Australian paper," Davison recalled.

"The subject of the article was the five players to watch out for at the 2003 World Cup. He told me I was one of the five in his article. I was shocked and flattered and I know that conversation gave me self-belief."

Comments
Topics mentioned in this article
Cricket World Cup 2011 John Davison
Get the latest updates on IND vs NZ 2021, check out the Schedule and Live Score . Like us on Facebook or follow us on Twitter for more sports updates. You can also download the NDTV Cricket app for Android or iOS.