Harbhajan Singh loves shooting from the lip, especially when it comes to the Australians whom India take on in the World Cup quarter-final in Ahmedabad on Thursday. 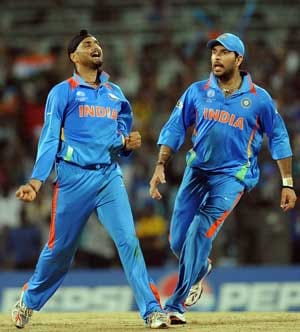 Harbhajan Singh loves shooting from the lip, especially when it comes to the Australians whom India take on in the World Cup quarter final in Ahmedabad on Thursday.

"My blood boils when I play the Aussies. We are confident and very positive." said Harbhajan. The spinner continues to be a thorn in Australia's side and has taken immense pleasure in talking them down.

When the Australians struggled against Pakistan in the Sydney Test (a Test which the hosts ended up winning) against Pakistan in 2010, Harbhajan told this newspaper: "Ever since (Shane) Warney and (Glenn) McGrath have gone, the Australians have struggled to get 20 guys out in a Test match. A lot of teams have the belief that they can beat Australia in any situation whether they are playing them at home or anywhere."

Meanwhile, India coach Gary Kirsten stressed that the energy levels of his players were high. "Our players are bubbling (with energy). They are positive before the Australia game. Hopefully, they will deliver," said Kirsten.

Virender Sehwag, who missed the last game against the West Indies due to a troublesome knee, didn't indulge in the customary pre-match football activity, but was at his striking best in the nets. After half an hour of batting practice, Sehwag told MiD DAY: "I am okay now, but you can never say what will happen in the future. All I can say now is that I am feeling good."

Seamer Munaf Patel, who was introduced into the attack as late as the 25th over against the West Indies on Sunday, was cool about his new role. "I was absolutely fine with that. If the team management wants to employ the same strategy against Australia, I don't have any problems with it," said Munaf. | Related | Zaheer continues his Australian opera

Comments
Topics mentioned in this article
Harbhajan Singh World Cup 2011 India Cricket Team Australia Cricket Team Ian Michael Chappell Kumar Sangakkara MS Dhoni Cricket
Get the latest updates on ICC T20 Worldcup 2022 and CWG 2022 check out the Schedule, Live Score and Medals Tally. Like us on Facebook or follow us on Twitter for more sports updates. You can also download the NDTV Cricket app for Android or iOS.