Mohammad Hafeez, the Pakistan allrounder, has backed his team to come up trumps in the World Cup semi-final against India, who, he claimed, would be up against the "strongest bowling attack in the world". 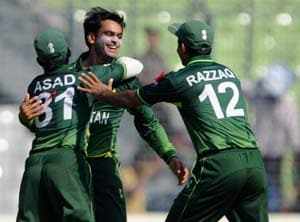 Mohammad Hafeez, the Pakistan allrounder, has backed his team to come up trumps in the World Cup semi-final against India, who, he claimed, would be up against the "strongest bowling attack in the world". Pakistan's bowlers, led by Shahid Afridi, the tournament's highest wicket-taker, have set up wins for their team in six of their seven games so far in the World Cup.

"We believe that we have the strongest bowling attack in the world at the moment," Hafeez said. "That is the key. Our bowling is our strength and our batsmen are just supporting them in whatever way is required."

Hafeez, who bowls offspin, opened the bowling in Pakistan's quarter-final win against West Indies and is part of an attack that has shaped up to be among the most threatening this tournament. Umar Gul had been successful in the late overs, Afridi's variations have proved difficult to deal with, left-arm seamer Wahab Riaz and left-arm spinner Abdur Rehman have chipped in while Saeed Ajmal and Abdul Razzaq have also been effective. Shoaib Akhtar, who will retire from international cricket after the World Cup, is also waiting his turn in the knockouts.

"At the moment, we definitely rely on our bowling but we know we are capable enough as batsmen to achieve any total," Hafeez said. Pakistan restricted Sri Lanka in their chase to 266, faltered against New Zealand in their only defeat thus far in the competition, and stepped up against Australia and West Indies to bowl both of them out for under 200.

The surface in Mohali, the venue for the semi-final, has traditionally been favourable for fast bowling, though Hafeez said Pakistan were prepared for anything. "We really don't care about the pitch; whatever it will be, we are good enough to perform to the best of our ability."

Pakistan haven't played in India since 2007 and the build-up to this high-profile clash has been massive. "For me this is the best cricketing opportunity as an individual player, to perform in such a pressure game, the semi-final of a World Cup and especially Pakistan-India."

Pakistan have played India on four occasions in World Cups and have been beaten each time. History, though, mattered little to Hafeez. "Yes, Pakistan has not defeated India in the World Cup, but in the last 12 years, Australia also had not lost a single World Cup game. But then they lost to us (by four wickets) and to India.

"There is no point thinking about the past. We think about the day; whoever the opponent is, we try to win on the day."

Comments
Topics mentioned in this article
Cricket Mohammad Hafeez World Cup 2011 India Cricket Team Pakistan Cricket Team
Get the latest updates on ICC T20 Worldcup 2022 and CWG 2022 check out the Schedule, Live Score and Medals Tally. Like us on Facebook or follow us on Twitter for more sports updates. You can also download the NDTV Cricket app for Android or iOS.