South Africa captain Graeme Smith has hailed the impact of Pakistan-born leg-spinner Imran Tahir upon his side at the World Cup, claiming the 31-year-old has provided added impetus. 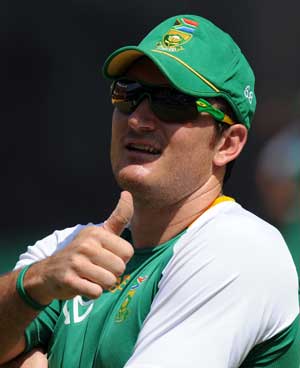 South Africa captain Graeme Smith has hailed the impact of Pakistan-born leg-spinner Imran Tahir upon his side at the World Cup, claiming the 31-year-old has provided added impetus.

Tahir is a cricketer for whom the phrase 'much-travelled' might have been invented.

During the course of his career he has played for 17 senior sides, as well as Pakistan A, in Pakistan, England and South Africa.

But throughout it all Tahir, who married a South African and qualified for his adopted country on residency grounds, has maintained a fine record.

And he showed his class by marking his South African debut with four wickets for 41 runs against the West Indies in the Proteas' tournament-opening win of this World Cup in Delhi.

Tahir might have made his debut for South Africa when he was called into the Test squad during the home series against England in January 2010.

However, the very same day, it emerged he was ineligible and it was not until January of this year he was granted citizenship by naturalisation.

South Africa have been criticised for an excessive reliance on fast bowlers.

But Smith, speaking ahead of South Africa's World Cup match against England here on Sunday, said he relished having an attacking spinner such as Tahir in his armoury.

"He gives us a really attacking option which is exciting," Smith said.

"From a captain's point of view, his variation is unpredictable and he uses a few more things throughout the game. He's certainly added impetus to our attack, especially through the middle periods.

"All in all we have a side with more variation and options available," added Smith of an attack that also includes Dale Steyn, arguably the best fast bowler in the world on current form.

Tahir has had spells with several English counties, notably Hampshire and Warwickshire.

But it was with Middlesex, the county of England captain Andrew Strauss, where he made his name in English cricket.

"We know what he brings to the party, quite clearly.

"As leg-spinners always do, they ask a number of different questions of batsmen. You need to be able to pick their variations."

But Strauss said his side's familiarity with Tahir would stand them in good stead come Sunday.

"Generally spinners benefit from players not having played them very much before, that's probably less of a problem for us (regarding Tahir) than it is for other sides."

Comments
Topics mentioned in this article
Graeme Smith World Cup 2011 South Africa Cricket Team Imran Tahir Cricket
Get the latest updates on ICC T20 Worldcup 2022 and CWG 2022 check out the Schedule, Live Score and Medals Tally. Like us on Facebook or follow us on Twitter for more sports updates. You can also download the NDTV Cricket app for Android or iOS.