Gayle fit to play against England

The best news for the West Indies on the eve of their World Cup Group B game against England on Thursday is the availability of their explosive opening batsman Chris Gayle, who has been declared fit to play after suffering abdominal strain. 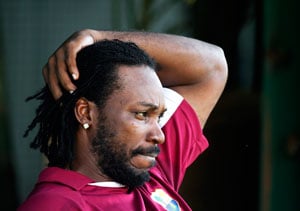 The best news for the West Indies on the eve of their World Cup Group B game against England on Thursday is the availability of their explosive opening batsman Chris Gayle, who has been declared fit to play after suffering abdominal strain.

Darren Sammy, who took over the captaincy from Gayle last year, said the former skipper was a key member of the squad, especially since he can also bowl off-breaks to some effect and that adds to his domineering presence at the crease.

"Our physio has said that Chris is fit and ready to go. We welcome Chris back. It is good to have him in the lineup and it is a boost to us in the vital match tomorrow against England.

"His presence on the field will be a massive plus for us. He is a key member of our team," said a relieved Sammy at a media conference here Wednesday.

Apparently, the West Indies have sufficient reason to believe that they can beat England and qualify for the knockout stage as Sammy harped on the travails of his rivals who have been playing cricket virtually non-stop for the past five months.

"It is an exciting game tomorrow and a good time to play England. Obviously, they have been on the road for long time. Away from their families for over five months should be on their minds.

"For them to stay in India would mean they have to win or some of them perhaps want to join their families. You would never know. As far as we are concerned, we will focus on what we need to do to win the game tomorrow," said Sammy.

Fielding the inevitable questions on pitch conditions, Sammy described the Chepauk surface as a "typical Indian wicket", bereft of grass and likely to aid spin which will be a factor in picking the playing eleven.

"The wicket looks like a good one and there is no grass on it. It is a typical Indian wicket. We will discuss it before the toss is taken and the toss is something that we have no control over. Of course, we will make right decisions and come out victorious," he said.

When asked specifically whether they would pick rookie leg-spinner Devendra Bishoo in view of the pitch conditions and South African Imran Tahir's success against England here, Sammy said a decision would be taken after a team meeting.

"Everyone in our team is eager to play. Of course, the way leg-spinner gets over England is food for thought for us. We will discuss tonight and the Core Committee will come up with the best combination."

"It is a big game for England. For us, it is the same like the matches that we played against Netherlands, Ireland, Bangladesh and we need to go there and execute our plans," he said.