Even as Indian Premier League Commissioner Rajeev Shukla hailed the comeback of Yuvraj Singh into the national side for the upcoming World Cup Twenty20 championship in Sri Lanka, former India captain Sourav Ganguly has expressed surprise at the batsman's inclusion in the team. 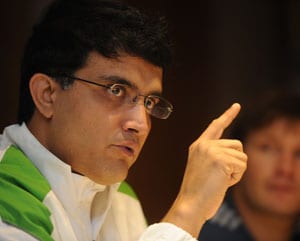 Even as Indian Premier League Commissioner Rajeev Shukla hailed the comeback of Yuvraj Singh into the national side for the upcoming World Cup Twenty20 championship in Sri Lanka, former India captain Sourav Ganguly has expressed surprise at the batsman's inclusion in the team.

Yuvraj has not played competitive cricket since India's World Cup triumph in April last year after he was diagnosed with a rare germ cell cancer.

"I am a bit surprised. I just wish he physically stays well because you know he has come out of a...what can I say, a big disappointment. He has recovered, which is the best thing that can happen, but it has not been a long time and I wish and pray he sustains," an apprehensive Ganguly told reporters during the sidelines of a function.

The former skipper, however, welcomed the decision of selectors to pick off-spinner Harbhajan Singh for the T20 competition.

"He is a class act. When you play for a long time you have hiccups. But I am happy that he has made a comeback," Ganguly said.

Shukla, while welcoming the decision of the selectors to consider Yuvraj for the World T20, said that his inclusion will be a big boost for the Indian players.

"It is a very courageous effort on part of Yuvraj Singh and everybody should welcome it. It would lift the morale of other players in the team," Shukla said.

Off-spinner Ravichandran Ashwin expressed his happiness over Yuvraj's inclusion into the team and expected the left-hander to announce his comeback with a big bang.

"What I am today is partly because of of Yuvi. The first time I broke into some kind of great cricket it was when he was the captain of Challenger side and he actually encouraged me and motivated me a lot to move ahead in my career.

"I am very pleased that he is back and I will be very happy if he comes back with a bang getting some runs for the team," Ashwin said.

Comments
Topics mentioned in this article
Cricket Anil Kumble Gary Kirsten Yuvraj Singh World Cup 2011
Get the latest updates on ICC T20 Worldcup 2022 and CWG 2022 check out the Schedule, Live Score and Medals Tally. Like us on Facebook or follow us on Twitter for more sports updates. You can also download the NDTV Cricket app for Android or iOS.