After guiding his team to a resounding win, skipper Kumar Sangakkara admitted that the first 10-12 overs of the Sri Lankan innings was a difficult period for batting. 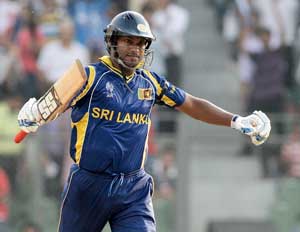 After guiding his team to a resounding win, skipper Kumar Sangakkara admitted that the first 10-12 overs of the Sri Lankan innings was a difficult period for batting.

"When we started batting, the wicket was a bit soft and we had lost our openers. The idea was to dig deep and rotate the strike in the beginning so that we can accelerate at the end," the Man-of-the-match said at the post match presentation ceremony.

The Lankan captain admitted that the heat and humidity took its toll and he never expected that there would be so much dew.

Asked whether he will keep these factors in mind if he comes back for the final, he replied, "There is a long way to go before we can think of coming back here. We know we are well on our way and it will be nice to play the quarterfinal at home."

The skipper lavished praise on Muttiah Muralitharan who bowled splendidly to take four for 25 despite a pulled hamstring that hampered his movements.

"Murali is a legend. He bowled on one leg today but did so well. We have a few days before the next game, and we hope he will be fully fit for the quarterfinals. This is his last World Cup and he has won so many matches for us. We want to make sure he enjoys himself, and we want him to bowl and take wickets," the skipper said of the seniormost member of the side.

Murali on his part stated that it was difficult to spin the ball due to the dew factor.

"Because of the dew factor, I tried bowling slower. The ball was skidding through and I was able to bowl the doosras," Murali said after the match.

Although he sustained a hamstring injury, the veteran spin wizard wasn't really bothered about bowoing through pain. "I have strained a hamstring but it isn't a big tear. It's a small one. I got treatment for that and I told captain that I can continue."

Losing captain Ross Taylor gave credit to Sangakkara and Mahela Jayawardene for their 45-run partnership that laid the foundation for victory. "We came here with hopes of taking a bit of momentum into the quarterfinal but the way Sangakkara and Jayawardene batted, they took the game away from us."

The stand-in-captain however played down the spat between Jayawardene and Nathan McCullum after the former was adjudged not-out when the off-spinner had taken a fine reflex catch off his own bowling.

"We thought it was out but the third umpire ruled it not out. But then we got on with the game." Taylor however was disappointed with the batting effort and feels that losing wickets regularly was the reason for such a big defeat.

About injury update of regular captain Daniel Vettori and seamer Kyle Mills, he said, "The injured guys are getting better every day and hopefully will be around for the next game."

"Mahela said he was not sure about Nathan's catch. We saw even in New Zealand innings when Mahela caught McCullum, it went upstairs. It can go either way," he said.

He feels New Zealand were a tough side to beat and remarked that though they were bowled out within 35 overs, a few good partnerships could have turned the match the other way.

"New Zealand are always a competitive side, very well balanced. They always do well in World Cups. We never take them lightly. But the kind of variations we have in our attack, we can trouble any attack."

"When the match finishes in 35 overs, it seems easy, but New Zealand had an okay start and Taylor had got them on course on the run-rate. A couple of partnerships would have turned it around but we did well in the tough period. Our bowlers bowled very well," he said.

"The wicket was fantastic, not a one-sided wicket as the ball was doing something in the first half and under lights. The ground was small and the outfield quick. The only negative thing was the dew in the night, but our bowlers adjusted to it beautifully," he concluded.

Comments
Topics mentioned in this article
Cricket Kumar Sangakkara Sri Lanka Cricket Team Nathan McCullum Kings XI Punjab World Cup 2011
Get the latest updates on ICC T20 Worldcup 2022 and CWG 2022 check out the Schedule, Live Score and Medals Tally. Like us on Facebook or follow us on Twitter for more sports updates. You can also download the NDTV Cricket app for Android or iOS.