Extra drinks on sixes and wickets - at pubs, restaurants

The Mohali match spelt brisk business. Most popular restaurants and pubs were almost 100 percent booked on Wednesday as they rolled out unlimited snacks and drinks, music and, of course, the India-Pakistan semifinal live on jumbo LCD screens. 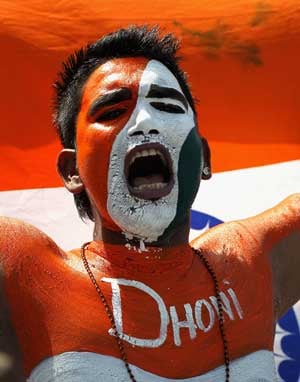 The Mohali match spelt brisk business. Most popular restaurants and pubs were almost 100 percent booked on Wednesday as they rolled out unlimited snacks and drinks, music and, of course, the India-Pakistan semifinal live on jumbo LCD screens.

While some had special packages costing over Rs.1,500 per person, a few decided to be generous enough to offer extra drinks on sixes, wickets, extra runs and hattricks!

Popular haunt Buzz at the MGF Metropolitan Mall in Saket extended its happy hours, on from 3 p.m. till 1 a.m. Projection screens apart, they also arranged dhols to add to the fervour of the cricket match, and even gave customers a chance to win drink and dinner hampers.

All seats were completely booked and there was only standing room available.

1 Cafe Bar, also in Saket, also had various special packages for the day, and was expecting "fantastic" footfall.

"Both our restaurants - 1 Cafe Bar and 1 Boulevard - are packed and sold out. We are expecting at least 400 people throughout the day. We have put up three LCD screens for our customers," said Abhay Singh, a representative of the popular joint.

Bhanu Prakash of Bellagio, a restaurant in Ashok Vihar, said: "We have made special arrangements in our banquet halls. They are already full. We are charging Rs.2,500 for couples and Rs.1,500 for stag entry and will offer unlimited food and drinks within the package. We have put up two screens each in our banquet hall as well as our restaurant."

Even The Lalit hotel at Barakhamba Road used its banquet hall for screening the match.

"We have put up a jumbo screen in our banquet hall where all the cricket fans would be able to see the match together. The entry fees for banquet hall is Rs.1,000. Special cocktails like Dhoni Helicopter will be on offer," said Pushparaj Pillai, a bartender at the hotel's bar 24/7.

"There will be a live beer station and dishes have been named after the sports. We are not taking any bookings now as the occupancy depends on first come-first served basis. We are screening the match and giving starters, main course and desserts at a special price of Rs.1,800 plus taxes per person just for today. There is a lot of excitement for the match, so we are also giving a buffet - to cash in on the excitement," said Shubhojeet, manager at Cibo.

Royal China at Nehru Place was offering free drinks for every six hit by India and every wicket taken by the men in blue, while Urban Pind in Greater Kailash-2 was offering three vegetarian and non-vegetarian snacks each with unlimited drinks at Rs.2,500.

Blues Bar in Connaught Place created a stadium like ambience by putting up posters on the wall and bats and balls on the tables. They have named drinks after cricketing terms - Square Cut and Dhoni Helicopter.

"But the real USP of the day is the special offer for women. The women fans of the men in blue will get a 20 percent discount all day," said a source at Blues Bar.

Many others like the Radisson Hotel and Bonsai had not planned any special offers, but installed LCD screens, where customers could enjoy the match as they binged on food and drinks.

Comments
Topics mentioned in this article
New Zealand Cricket Team India Cricket Team Pakistan Cricket Team Cricket World Cup 2011
Get the latest updates on ICC T20 Worldcup 2022 and CWG 2022 check out the Schedule, Live Score and Medals Tally. Like us on Facebook or follow us on Twitter for more sports updates. You can also download the NDTV Cricket app for Android or iOS.