Excitement rose and security tightened on Tuesday ahead of the cricket World Cup showdown between India and Pakistan, one of the great sporting contests that has huge political significance. 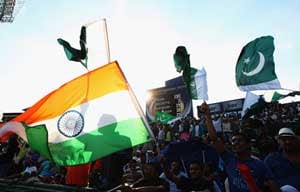 Excitement rose and security tightened on Tuesday ahead of the cricket World Cup showdown between India and Pakistan, one of the great sporting contests that has huge political significance.

The South Asia neighbours, whose shared history of brotherhood and bloodshed adds intensity to any encounter, will meet Wednesday in the semifinal of the World Cup in what will be one the highlights of the competition.

Speculation has reached fever pitch about the outcome of the epic clash and whether it will help relations between the old nuclear-armed foes, who have fought three wars since independence in 1947.

India's Prime Minister Manmohan Singh has invited his Pakistani counterpart Prime Minister Yousuf Raza Gilani to watch the game with him, which will be the first meeting between the leaders since April 2010 in Bhutan.

The goodwill gesture comes at a time when the countries are tentatively getting their peace process back on track after it was derailed by the 2008 Mumbai attacks, which India blamed on Pakistani militants.

A Facebook poll on "Who Will Win The Semifinal" had drawn 750,000 votes on Tuesday morning, with two thirds voting for India - perhaps reflecting the country's role as favourites and its superior population weight.

With so much at stake and the history of militant attacks in South Asia, a security blanket involving 2,000 police and paramilitaries - reportedly armed with anti-aircraft guns and missiles - has been thrown around the venue.

"We are leaving nothing to chance. The security will be multi-layered," local police chief G.P.S. Bhullar told reporters on Tuesday.

As part of security checks, late-night raids were conducted at various hotels around the venue in the town of Mohali in northwest India and nearby Chandigarh on Monday night to weed out suspicious visitors.

Guests were asked to open their doors at midnight to allow security personnel to scan their luggage.

The match will be a contest between Pakistan's well-balanced bowling attack and India's star-studded batsmen, including opener Sachin Tendulkar who needs just one more century for a hundred international hundreds.

Pakistan, World Cup champions in 1992, have lost all four of their encounters with India in the competition, but go into the semi-final buoyed by a 10-wicket mauling of West Indies in the quarterfinal.

For the Indian team, an underachieving World Cup heavyweight who last won the competition in 1983, a victory on home turf would lead to euphoria in the cricket-crazy country of 1.2 billion people.

The final of the competition, co-hosted by India, Sri Lanka and Bangladesh, takes place on Saturday in Mumbai.

The other semifinal, largely forgotten in India amid the hype about the Pakistan game, features Sri Lanka and New Zealand who will meet on Tuesday in Colombo.

Comments
Topics mentioned in this article
Cricket World Cup 2011 New Zealand Cricket Team India Cricket Team Pakistan Cricket Team
Get the latest updates on ICC T20 Worldcup 2022 and CWG 2022 check out the Schedule, Live Score and Medals Tally. Like us on Facebook or follow us on Twitter for more sports updates. You can also download the NDTV Cricket app for Android or iOS.