What a World Cup England are producing. From a thrilling tie against India to the shock of losing to Ireland they produced a stunning fightback to beat South Africa by six runs in a gripping contest on tough pitch in Chennai. 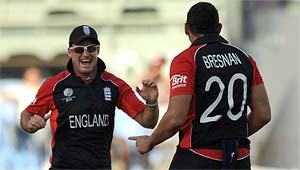 What a World Cup England are producing. From a thrilling tie against India to the shock of losing to Ireland they produced a stunning fightback to beat South Africa by six runs in a gripping contest on tough pitch in Chennai. Scorecard

They took all ten wickets for 102 through a combination of spin, reverse swing, perseverance and the never-say-die attitude which is such a trait of this team, with Stuart Broad sealing the victory with two wickets in four balls after Dale Steyn's 31-ball 20 had taken his team close to the winning line.

It showed you don't need 600 runs to produce an epic one-day international and the celebrations when Morne Morkel was caught behind showed how important it was for England spirits. Without it they would have faced the real possibility of heading home early, but can now approach the clashes against Bangladesh and West Indies with much greater heart.

What will please Andrew Strauss and Andy Flower was that it was the much-maligned attack that won the match - after the batting struggled to post 171 - as Broad took 4 for 15, Anderson produced a devastating burst of reverse swing shortly before the 34-over ball change and Swann bowled with guile and craft to set up the prospect of victory.

Despite the tricky pitch, South Africa had broken the back of the run-chase after an opening stand of 63 between Graeme Smith and Hashim Amla.

However, they suffered two slumps; the first as three wickets fell for 19 - with Broad claiming the vital scalps of Amla and Jacques Kallis - then the more significant slide from 124 for 3 to 165 all out as Anderson produced some wonderful reverse swing, Ian Bell pulled off a fine piece of fielding at short leg to run out Faf du Plessis, and Broad cleaned up the tail.

Swann could have dismissed Smith almost half a dozen times with spiting, turning deliveries until one finally bounced and brushed the thumb although it needed the DRS to overturn Asoke de Silva's on-field not out decision.

Amla had moved along serenely despite the testing surface until he became a little lazy against Broad and chopped into his stumps. Kallis then edged a drive and, in a rare sight, accepted Prior's word on whether it had carried without asking for the umpires to check.

AB de Villiers, who began the tournament with back-to-back hundreds, and Francois du Plessis are normally free-flowing batsman decided to consolidate rather than attack during their 42-run stand.

It wasn't a major problem for South Africa at the time with the asking rate remaining comfortable, but it conceded the momentum and when the breakthroughs came there were a few runs to play with.

Anderson produced his finest spell of reverse swing since the Ashes as he trimmed de Villiers' bails and then clattered JP Duminy's stumps two balls after he'd been reprieved by the DRS having been given caught down the leg side. It was a controversial moment because there didn't seem enough evidence to overrule but Anderson soon made it irrelevant.

In between those two wickets, Bell showed brilliant alertness at short leg as he stopped du Plessis's shot and flicked it to Prior in time to complete the run out.

England were buzzing having taken 3 for 0 and the scoring remained at a standstill for the next three overs as Morne van Wyk and Robin Peterson struggled against spin. Michael Yardy, the weak link in the attack, then had Peterson caught behind trying to cut but the ball change at 34 overs meant the threat of reverse swing was momentarily removed.

Andrew Strauss opted to keep Swann back for one over and used Yardy and Kevin Pietersen in tandem. Both were given one over too many as Steyn took advantage, driving Yardy through the covers and lofting Pietersen straight down the ground. Slowly but surely he and van Wyk chipped out 33 tension-filled runs.

However, because of the extensive use of the spinners Strauss was able to return to his quicks and with 12 needed Tim Bresnan found van Wyk's inside edge which crashed into the stumps. Then it was over to Broad who trapped Steyn lbw with his first ball and Morkel had clearly decided to try and finish the game quickly when he got the final edge.

The match could not have been a greater contrast to the two thrilling run-fests England were involved in Bangalore. It became abundantly clear this wouldn't be a 300 match when Peterson stunned everyone by removing both openers in his first over. The value of South Africa's rounded attack was again on show as the frontline spinners took seven wickets and were backed up by Morkel and Steyn with England losing their top three for 15 and last six for 37, but their failure to cross the line will raise old concerns.

Smith isn't known for out-of-the-box captaincy but it was clever to hand Peterson the new ball. Strauss tried to take an attacking approach by using his feet, but could only pick out de Villiers, who took a fine running catch at deep midwicket. If that was a bonus for South Africa they could barely believe what happened three balls later when Pietersen pushed forward and got a regulation edge low to first slip. Bell soon became Peterson's third as he pushed a return catch back to the bowler after being beaten in the flight.

Ravi Bopara, back in the side at the expense of Paul Collingwood, set about the recovery with Jonathan Trott who was saved by the DRS after being given lbw against Imran Tahir on 20. Bopara nearly ran himself out on 26 - it wouldn't have been the first time - but a dive just saved him then he broke a run of singles with a handsome straight drive for six before Trott reached fifty from 87 balls.

Having used up considerable time he needed to up the tempo but Tahir pulled off a fine return catch after deceiving his former Warwickshire team-mate in the flight. Prior had the chance to build an innings after previously needing to hit-out from the start but was undone by Morkel.

Bopara's 60, his first ODI fifty since November 2008, remained the top score and will have given him huge confidence for the rest of the tournament as he showed he could adapt to conditions. The lower order couldn't build momentum against Tahir and failing to use up 26 deliveries looked like being costly. However, once again England dug deep when all seemed lost and gave the World Cup another memorable finish.

Comments
Topics mentioned in this article
World Cup 2011 South Africa Cricket Team England Cricket Team West Indies Cricket Team Australia Cricket Team Cricket
Get the latest updates on ICC T20 Worldcup 2022 and CWG 2022 check out the Schedule, Live Score and Medals Tally. Like us on Facebook or follow us on Twitter for more sports updates. You can also download the NDTV Cricket app for Android or iOS.