England head into their final Group B match against the West Indies on Thursday knowing defeat will signal the end of their World Cup campaign. 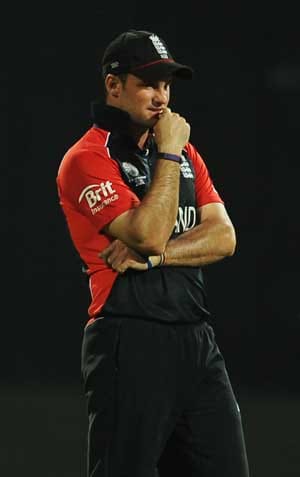 England head into their final Group B match against the West Indies on Thursday knowing defeat will signal the end of their World Cup campaign.

Even victory may not be enough for Andrew Strauss's men to go through to the knockout stages with England having to rely on other results going their way.

A see-saw tournament for England has seen them lose to Ireland and Bangladesh yet tie with India and beat a highly-fancied South Africa side.

Significantly, that win over the Proteas came at Chennai's Chidambaram Stadium where England held their nerve on a sharply turning pitch to win a low-scoring thriller by six runs.

Now they will look to off-spinner Graeme Swann to again put the squeeze on the batsmen in a match that isn't quite as decisive for the West Indies, who return to the Chidambaram three days later for a group finale against India.

"It does give things a certain amount of clarity," said Swann, all but unplayable at times while taking one for 29 against South Africa.

"If we win four games, we win the World Cup which is very simple. If we'd won our first four games it would have been a much nicer position to be in but there's no point in looking back. It all comes down to Thursday."

Swann, who in his first over in Test cricket took two wickets against India in Chennai in 2008, added: "I hope the wicket is similar to the South African one. If I could roll it up and take it around with me, I happily would."

However, he warned: "The West Indies have got Sulieman Benn, who is a fine spin bowler in my opinion."

The West Indies also have two big-hitting batsmen in opener Chris Gayle and the in-form Kieron Pollard who can change the momentum of a match in a short space of time in a way none of their England counterparts have ever managed.

Pollard hammered 94 off just 55 balls as the West Indies beat Ireland by 44 runs last time out and it was an innings the all-rounder hopes has rid him of the tag of being 'just' a Twenty20 cricketer.

"What's been said about me being a 20-over specialist, that's just history for me now," Pollard, 23, said.

"I had an opportunity to prove myself and there cannot be a bigger stage than the World Cup to do that. My innings showed what I can do. I will use this as a positive."

Whether the Chennai pitch remains the best one to tee-off remains to be seen.

But the good news for the West Indies is that a win against either England or India will see them into the quarterfinals and even two defeats may not be enough to end their World Cup.