England have recovered from the shock loss to minnows Ireland in a World Cup match and the team is confident of beating title favourites South Africa in Sunday's must-win match, insisted all-rounder Paul Collingwood. 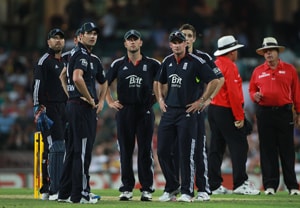 England have recovered from the shock loss to minnows Ireland in a World Cup match and the team is confident of beating title favourites South Africa in Sunday's must-win match, insisted all-rounder Paul Collingwood.

"Of course we got a disappointing result against Ireland. But this team usually bounces back from disappointments very fast and immediately. We want a good result on Sunday," Collingwood said last night on the sidelines of a function to launch Slazenger sports products, for which he is one of the brand ambassadors. Collingwood also conceded that South Africa are a top team and very strong in all departments.

"But we are a very strong side ourselves. In the past two years, we have played against South Africa a fair bit and actually have a good record. We won the one-day series against them. But the conditions are different here and we have got to adjust and play better than them on that day."

He asserted that the upset loss to Ireland had not dented the confidence of the English players. Collingwood blamed the batsmen-friendly flat wickets for the poor show by the bowlers in their last three matches.

"All the guys are disappointed obviously to lose against Ireland. We have built a very strong side not just a strong side with skills but also mentally in the last couple of years. A defeat like this can affect the boys but I don't think it will affect the confidence too much.

Collingwood said the team's batting had so far been magnificent but admitted that the Englishmen needed to improve bowling and fielding.

"Every single game we have played so far has been very very exciting. I wouldn't say we are too disappointed with our form. In the world cup you need to beat the best sides in the world to win the World Cup," he said.

Defending the bowlers, who have come in for some harsh treatment in the matches against the Netherlands and India besides the Ireland game, Collingwood said it was difficult to bowl on batsmen-friendly wickets.

"I think it is probably got more to do with the wickets. The wickets tend to be very much like the road you have outside this hotel. Flat not much grass on them and batsmen-friendly.

"Every single team that has pretty much scored towards around 300 runs in the competition so far which proves these wickets small boundaries fast outfields very difficult to bowl on. But every team seemed to be having that difficulty," Collingwood, who himself has taken only one wicket in the three games so far, said.

Collingwood, who played a key role in England's famous Ashes win, disagreed that the side has peaked a little too early for the World Cup.

"We managed to retain the Ashes and win the series in Australia which has been a huge goal for us for a long time. But we used to have these schedules now as cricketers. We are obviously disappointed to have lost the ODI series in Australia. We have got this very important world cup now.