England were deciding whether to stick with misfiring strike bowler James Anderson as their World Cup date with destiny approached. 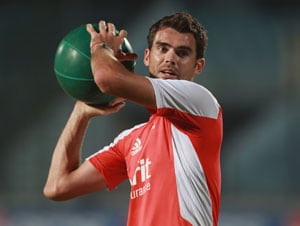 England were deciding whether to stick with misfiring strike bowler James Anderson as their World Cup date with destiny approached.

Andrew Strauss's Ashes-winners must beat the West Indies on Thursday to have a chance of reaching the quarterfinals, although they will still need other results to go their way.

Defeat would spell the end of a World Cup campaign that has already seen England suffer shock losses to both Ireland and Bangladesh.

One major problem for England has been the form of Ashes spearhead Anderson, whose four wickets have cost 282 runs at an average of more than 70 apiece.

His form has been made worse by the absence of fellow seamer Stuart Broad, who took four wickets in England's six-run win over South Africa, but has since been ruled out of the World Cup with a side strain.

"Jimmy has had a tough time in some of the games in the World Cup so far but we all know what a qualify performer he is," said England captain Strauss, who returned to training on Wednesday after a bout of illness.

"He has done it for us over and over again during the course of the winter and previously. So his name is very much in the mix for selection."

Fast bowler Ajmal Shahzad became the latest player, after Strauss and off-spinner Graeme Swann, to succumb to illness on Thursday.

Opening batsman Strauss, asked if Shahzad's health would have a bearing on Anderson's selection now Chris Tremlett has replaced Broad, said: "No, not necessarily...It is something we have to think about."

Strauss said he hoped the make-or-break nature of Thursday's contest would see England raise their game.

"We have done well in big matches over the last couple of years. The equation is very simple and this isn't a time to go into our shells -- we have to got out there and take the West Indies team on.

"We've lost two games we shouldn't have lost. We've put ourselves in this situation, which is disappointing. We're not going to hide away from that.

"But the equation is very clear. We have to win this game. There's no reason for us to doubt ourselves. We should go out and play good, aggressive, attacking cricket and hope that is enough to send us through."

Strauss maintained England could yet go on to win what would be a first World Cup title.

"Once every team gets into the last eight, then every game is a must-win game. I have every confidence we will be able to do that."

Strauss dismissed the effects of fatigue on a squad which has been on the road virtually non-stop for almost five months.

"One thing I would say is that fatigue is the last thing on our minds," Strauss insisted.

"We know what the prize is and we are determined to make the most of our opportunity to take that prize."