England call up Rashid in place of Yardy

England called up Adil Rashid into their World Cup squad ahead of their quarter final against Sri Lanka after left-arm spinner Michael Yardy withdrew with depression on Thursday. 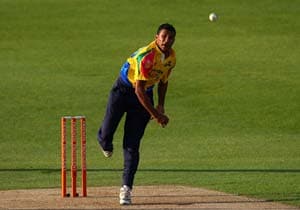 England called up Adil Rashid into their World Cup squad ahead of their quarter final against Sri Lanka after left-arm spinner Michael Yardy withdrew with depression on Thursday.

Leg-spinner Rashid will arrive in Colombo on Saturday -- the same day as England face Sri Lanka -- and so faces a possibly needless journey from the West Indies where he is playing for the England Lions.

"We have been closely monitoring Adil's progress over the winter," said national selector Geoff Miller.

"He will have benefited from being part of the Lions tour in the Caribbean and his recent experience in Australia where he played a key role in helping the Redbacks (South Australia) win the Big Bash T20 competition."

The 23-year-old Rashid has taken three wickets in five one-day internationals and last played at this level against South Africa at Centurion in November 2009.

Comments
Topics mentioned in this article
England Cricket Team Australia Cricket Team West Indies Cricket Team Michael Yardy World Cup 2011 Adil Rashid YOR Cricket
Get the latest updates on ICC T20 Worldcup 2022 and CWG 2022 check out the Schedule, Live Score and Medals Tally. Like us on Facebook or follow us on Twitter for more sports updates. You can also download the NDTV Cricket app for Android or iOS.