India skipper Mahendra Singh Dhoni defended the decision to give Ashish Nehra the final over, saying the paceman has done a good job in the past. 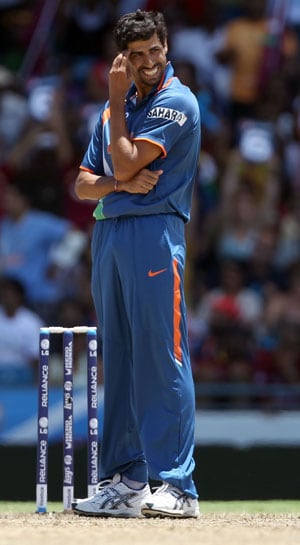 India skipper Mahendra Singh Dhoni defended the decision to give Ashish Nehra the last over of the South Arican innings, saying the paceman has been doing a nice job and hoped that the left-armer will win crunch games for the country later in the World Cup.

South Africa needed 13 runs in the last over to beat India in a group B league match but Nehra could not stop them from doing so, leaking 16 runs in the first four balls.

"Bowlers need to bowl at the right spots and if you are not doing that, more often than not, you are going to get hit. Bhajji (Harbhajan) was the only other choice but I thought a seamer would be better. Maybe I was wrong, but I thought that was the better option.

"Nehra has been the mean bowler for us right from the start till the old ball. We have belief in him. Not this one, but may be he will come good in crunch games for us," Dhoni said after India's three-wicket defeat. Dhoni also said not batting the full quota of overs, cost India.

"Had we batted for full 50 overs, we could have got 20 more runs. What is important is you don't play for the crowd you play for your country. We should have batted the full fifty overs. If we could have fielded better we could've made the score look bigger, but we're not a side known for our fielding," he said.

Winning captain Graeme Smith was all smile and patted his teammates for the "great" effort.

"For 25 overs up front we took a beating, but for the other 75 we came back really hard and showed some real fight. The guys showed a lot of composure, it was helluva noisy out here. Dale bowled well, and to chase down the runs under pressure is great. The confidence you get out of a win like this is huge," he said.

He had special words for tail-ender Robin Peterson, who smacked Nehra for 16 runs in the last over to seal the win for India.

"I haven't seen Robbie [Peterson] hit the ball that clean in a long time, we've backed him in this world cup and he's performed. We can get on a run now, we've had long breaks between our games but we're playing every three or four days now," he said.

Paceman Dale Steyn was adjudged Man-of-the-Match for his five-wicket haul.

"After my first five overs I was staring down the barrel, but we pulled it backed beautifully. A great team performance. Once we picked up one wicket, we picked up another and we started build up pressure and a wave of energy on the field that we could capitalise on," he said.

Comments
Topics mentioned in this article
India Cricket Team Ashish Nehra World Cup 2011 MS Dhoni Yuvraj Singh Suresh Raina South Africa Cricket Team Cricket
Get the latest updates on ICC T20 Worldcup 2022 and CWG 2022 check out the Schedule, Live Score and Medals Tally. Like us on Facebook or follow us on Twitter for more sports updates. You can also download the NDTV Cricket app for Android or iOS.