Bangladesh hope to come out with all guns blazing when they clash with powerful South Africa in a must-win game on Saturday to enter the World Cup quarterfinals. 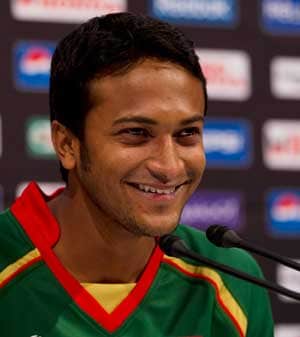 Bangladesh hope to come out with all guns blazing when they clash with powerful South Africa in a must-win game on Saturday to enter the World Cup quarterfinals.

England's dramatic win over the West Indies in Chennai on Thursday ruined Bangladesh's hopes of easing into the knock-out rounds without having to contend with South Africa's firepower.

They now face a make-or-break battle to determine their future in the tournament in front of 25,000 fanatical supporters in the day game at the Sher-e-Bangla stadium.

South Africa are the only team in Group B to have qualified for the quarterfinals, with four others - India, West Indies, Bangladesh and England - vying for the remaining three berths over the weekend.

Bangladesh are tied with the West Indies on six points, India and England are on seven each and group leaders South Africa are on eight.

If Bangladesh lose to South Africa, their poor net run-rate of -0.765 will almost certainly lead to their exit, unless India defeat the West Indies by a huge margin in Chennai on Sunday.

South Africa have won 12 of their 13 one-dayers against Bangladesh, five of them on the Tigers' home soil, including a 3-0 sweep in 2008.

Bangladesh's lone win came during the Super Eights round of the previous World Cup in the Caribbean when they clinched a 67-run victory on a turning track in Providence.

After Mohammad Ashraful scored 87 to lift Bangladesh to 251-8, South Africa were shot out for 184 with left-arm spinner Abdur Razzak claiming 3-25.

Bangladesh's Australian coach Jamie Siddons admitted the task ahead was difficult - but not impossible.

"Beating South Africa is not going to be easy," he said. "They are playing really good cricket and they are a great team.

"But we have the advantage of playing at home. We need to play well and put ourselves in with a chance."

"It's not just about one or two players, but those two are very important to our success when competing against big teams.

"Tamim's failing at times and Shakib's not firing but our batting has still been good enough to win us three of the five matches so far.

"If those two do well, we can put a really good total on the board and put South Africa under a lot of pressure."

South Africa will look to Saturday's match to fine-tune their preparations for the business end of the tournament.

Skipper Graeme Smith said earlier he wanted his team to click together in all departments which he feels the Proteas have not managed in previous matches.

"In every game there's probably something you can say we have not done well," said Smith, who is himself short of runs with 45 in the first match against the West Indies his best in the tournament.

South Africa may juggle their playing XI against Bangladesh to rest niggling injuries and give the reserves a chance to flex their muscles.

Pace spearhead Dale Steyn may be rested after picking up a minor side strain against Ireland on Tuesday, with left-arm seamers Lonwabo Tsotsobe and Wayne Parnell waiting in the wings.

South Africa are undecided about playing leg-spinner Imran Tahir, who has recovered from a fractured thumb, and AB de Villiers, who missed the Irish game with a thigh muscle strain.

Comments
Topics mentioned in this article
World Cup 2011 South Africa Cricket Team Bangladesh Cricket Team Cricket
Get the latest updates on ICC T20 Worldcup 2022 and CWG 2022 check out the Schedule, Live Score and Medals Tally. Like us on Facebook or follow us on Twitter for more sports updates. You can also download the NDTV Cricket app for Android or iOS.