Defiant South Africa captain Graeme Smith backed his team to succeed at the World Cup despite the capitulation against England which had his critics dusting off their 'chokers' accusations. 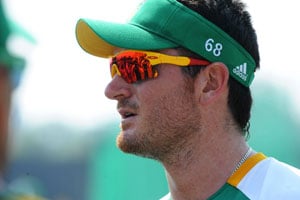 Defiant South Africa captain Graeme Smith backed his team to succeed at the World Cup despite the capitulation against England which had his critics dusting off their 'chokers' accusations.

"I believe in this team...we have the opportunity to shape today & tomorrow and we will be there when it counts. Thanx to our loyal supporters," said Smith on Twitter on Monday.

"One thing is for sure...I'm not gonna admit to people's agendas...this team has something."

On Sunday, Smith hit back at claims his side had 'choked' after a dramatic six-run loss to England in Chennai.

Needing just 172 to win, they were cruising at 63 without loss. But they then lost three wickets for 19 runs and three more in the middle of their innings for no runs with the score on 124.

"That's not predictable at all, is it?" said a sarcastic Smith, when questioned about South Africa's composure under stress.

"Pressure? We've handled ourselves in some tough situations over the last few years. I don't think pressure is our weakness."

Comments
Topics mentioned in this article
South Africa Cricket Team Cricket Graeme Smith World Cup 2011
Get the latest updates on ICC T20 Worldcup 2022 and CWG 2022 check out the Schedule, Live Score and Medals Tally. Like us on Facebook or follow us on Twitter for more sports updates. You can also download the NDTV Cricket app for Android or iOS.