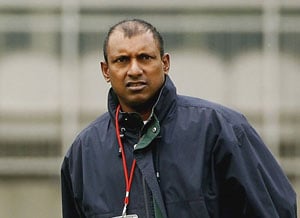 De Silva, who is now the team's chief selector, also said the day-night match at the R. Premadasa stadium will be "tough", with the toss playing a vital role when the dew factor kicks in, told the state-run Daily News.

De Silva, who played in the 1996 World Cup-winning team, said Sri Lanka's main concern so far has been the inconsistency in the batting department.

"He was very critical of the middle order which has not yet performed up to expectations," the report said quoting de Silva.

He said England were comfortable playing quality spinners and have the batsmen to make big scores.

"They (England) have the potential to upset any side on that particular day," said de Silva.

Comments
Topics mentioned in this article
Aravinda De Silva World Cup 2011 Cricket
Get the latest updates on ICC T20 Worldcup 2022 and CWG 2022 check out the Schedule, Live Score and Medals Tally. Like us on Facebook or follow us on Twitter for more sports updates. You can also download the NDTV Cricket app for Android or iOS.