Could not have asked for more from team: Vettori

After a clinical display that resulted in a 10-wicket victory over Zimbabwe in their crucial Group A World Cup clash here on Friday, New Zealand captain Daniel Vettori said he could not have asked for a better performance from his teammates. 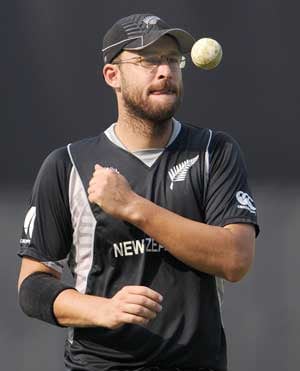 After a clinical display that resulted in a 10-wicket victory over Zimbabwe in their crucial Group A World Cup clash here on Friday, New Zealand captain Daniel Vettori said he could not have asked for a better performance from his teammates.

The win put New Zealand to a good position to enter the knock-out quarterfinal stage from Group A.

"It was a must-win game. There was a little pressure on the guys. Brendon (McCullum) and (man-of-the-match) Martin Guptill played a controlled innings, innings of quality," said Vettori.

The two New Zealand openers put on 166 runs in 33.3 overs to power their side to a comprehensive victory ahead of tougher battles against dangerous Pakistan and fancied Sri Lanka.

Vettori also welcomed the return to the team of Kyle Mills who missed action for a month due to a back injury. "Kyle knows his role. He brings good balance to the team," said Vettori about Mills who grabbed 2 for 29 in his 10 overs.

"It was a very good one-day wicket. There were plenty of runs on it. The way Martin and Brendon batted it looked to be a 300-wicket," said the New Zealand skipper.

Vettori said on this superb batting track his bowlers bowled splendidly to keep Zimbabwe under pressure with initial inroads.

"It was great seam bowling and good fielding. Once you get the initial breakthroughs and can set attacking fields, it makes things easy for the latter bowlers like me," he explained.

Zimbabwe were struggling at 42 for 3 in 13 overs and then were tottering at 46 for five inside the first two powerplays. Though a lot of reviews were asked for through the controversial UDRS, Vettori said that the two on-field umpires came out with flying colours.

Looking ahead to their next game against Pakistan, Vettori said he and his team know how good their rivals' bowling attack is.

"They have a very good attack. Their bowlers bring a lot to the table. They can defend any total," said Vettori about the Pakistan attack consisting of captain Shahid Afridi, Umar Gul and Shoaib Akhtar.

Guptill, who made a superb, unbeaten 86 in 108 balls studded with two sixes and seven fours, said he played his natural game.

"I played my natural game. I played straight. We (he and McCullum) compliment each other well. We know we have to lead from the front against Pakistan," he said.

Comments
Topics mentioned in this article
Brendon McCullum World Cup 2011 Daniel Vettori Cricket Zimbabwe Cricket Team New Zealand Cricket Team Martin Guptill
Get the latest updates on India vs South Africa and check out  Schedule, Results and Live Score. Like us on Facebook or follow us on Twitter for more sports updates. You can also download the NDTV Cricket app for Android or iOS.