If Dale Steyn doesn't get you, Morne Morkel will. Ireland found that out the hard way, as their hopes of a second World Cup upset receded under Eden Gardens' lights. 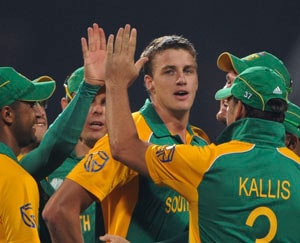 If Dale Steyn doesn't get you, Morne Morkel will. Ireland found that out the hard way, as their hopes of a second World Cup upset receded under Eden Gardens' lights.

Morkel removed the openers with his menacing lengths, and the back-up bowlers, led by Robin Peterson, ensured there were no escape routes for the middle order. At the 25-overs mark, Ireland had limped to 106 for 6, and with Kevin O'Brien dismissed, were unlikely to pull off another miracle.

Morkel was as clinical with the ball, as he was clumsy on the field. In the opening over from Steyn, he muffed a regulation stop at fine-leg to gift William Porterfield four runs. Steyn glared, and Morkel looked distressed as he passed the ball back.

In the next over, Morkel removed Porterfield with a steep lifter outside off stump. In Steyn's next over, Morkel ran in from third man with his hands pointing upwards and made a meal of Paul Stirling's top-edged slash. Morkel promptly removed Stirling with another steepler outside off, and his sheepish reaction to the dismissal was understandable. Steyn and Morkel shared a smile afterwards as the fielders came together to celebrate - these fast bowlers weren't exactly hunting in a pair, but Ireland were still being preyed upon.

Niall O'Brien tried to kickstart the chase by carting Morkel audaciously on-the-up over long-off, but perished when Jacques Kallis replaced Steyn for the ninth over. Ed Joyce was unable to repeat his heroics against West Indies, and was trapped in front in Johan Botha's first over, leaving the chase in shambles at 51 for 4.

Kallis welcomed Kevin O'Brien to the crease with a bouncer that thudded into the back, flooring the batsman. The next ball was short again, and Kevin responded by dumping it through midwicket. It was the only time the Irish batsmen showed any defiance against the hostile bowling. Wilson played some memorable shots against the spinners, an effortless back-foot heave off Robin Peterson standing out. He kept targeting midwicket and third man for boundaries, and looked set to keep Ireland's fight going.

Peterson, however, scuppered the prospects of an upset by removing both batsmen in the 22nd over. If not for an uncharacteristic drop by Kallis in the slips, Ireland would have lost their seventh wicket with less than 100 on the board. With the game petering into a mismatch, umpire Kumar Dharmasena added fuel to the UDRS fire by deciding against reversing an lbw call off Peterson's bowling despite all the requirements of the 2.5 metres clause being met.

The World Cup finally reached Eden Gardens, and the sparse crowd that turned up on an overcast afternoon were treated to a JP Duminy special that ended one run short of a well-deserved ton as South Africa finished with 272. The final score seemed a far cry away when Ireland's trademark enthusiasm had hustled out South Africa's top half by the 27th over with just 117 on the board. South Africa were, however, let off the hook by an inconsistent Irish effort, that showcased the issues that hold back upwardly-mobile Associate teams. There was disciplined, if somewhat limited bowling; there were breath-taking fielding efforts to go with grassed sitters; and there was the glaring inability to land the knockout punch, as they let things drift after hustling the opponents into a corner. Duminy was ready when they ran out of steam, and made them pay with a well-paced innings.

Ireland's initial brilliance was epitomised by two outstanding efforts on the field - first, George Dockrell moved rapidly to his left from a widish third man, tumbled, yet held on to a fierce upper cut from Hashim Amla. Then, John Mooney picked up the ball and threw down the stumps in one fluid motion from midwicket to run Graeme Smith out. Smith's fall in the tenth over exposed South Africa's middle order and they continued to wobble as Jacques Kallis was run out for the second successive innings, and Faf du Plessis guided tamely into the slips. Ironically, it was AB de Villiers' replacement that helped South Africa stem the rot that might have never set in if he had been playing. de Villiers' absence allowed Morne van Wyk to bat at No. 3 and Colin Ingram at No. 7, and both batsmen played crucial hands to propel South Africa.

By his own admission, van Wyk's batting is not poetry in motion, and his cameo at No. 3 justified that evaluation. His loose on-the-up drives without much feet movement leave him prone to edges and soft dismissals, and he was lucky to escape twice, with Kevin O'Brien and Paul Stirling letting him off in the covers and in the slip cordon respectively. The reprieves had no impact on van Wyk, who kept backing himself to clear the infield, until George Dockrell slipped a perceptive arm-ball past him in the 16th over. Things got worse quickly when Kallis and du Plessis perished, but Duminy and Ingram turned things around.

Dockrell continued to spear in arm-balls from over the wicket, and Duminy chose caution against a line that has tormented him in the past. He kept deflecting and nudging, lapping and steering for ones and twos, and his inventiveness inevitably led to the Irish dropping their guard. Ingram cashed in when they delivered loose deliveries, targeting the square fields with a series of powerful horizontal-bat shots. Johnston castled him in the 40th over, but by then South Africa had wrested control.

In the meantime, Duminy had seamlessly shifted gears from nurdle to attack mode, and was on the verge of hitting overdrive. After 46 boundary-less balls, his first four came through the most audacious of reverse-sweeps. By the time he brought up his half-century, caressing Johnston into the covers, his strike-rate was nudging the 80s. Ingram's dismissal forced Duminy to delay the Powerplay to the end of the innings, allowing Johan Botha time to find his bearings.

Duminy had chugged along to 68 when the Powerplay came on by default in the 46th over. A couple of quiet overs from Mooney and Rankin suggested a whimpering finish. Duminy, however, lined up Johnston for special treatment in the 49th over, dumping him for four and six over the leg side, before forcing another boundary to third man.

With three balls to go, and 99 against his name, Duminy did not push the single. He instead looked for the straight six and perished in the outfield. In a sense, it was a fitting end to an innings that was all about shot selection and selflessness.

Comments
Topics mentioned in this article
Ireland Cricket Team Cricket South Africa Cricket Team World Cup 2011
Get the latest updates on ICC T20 Worldcup 2022 and CWG 2022 check out the Schedule, Live Score and Medals Tally. Like us on Facebook or follow us on Twitter for more sports updates. You can also download the NDTV Cricket app for Android or iOS.