After five cliffhangers in five contests, the permutations are simple. Anything less than a victory, and England are gone, eliminated in embarrassing fashion for the fifth World Cup in succession 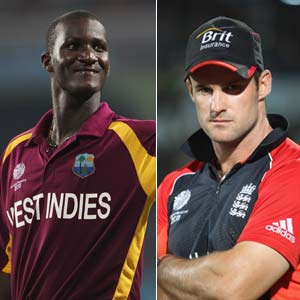 "Did I entertain you?" was the poignant sign-off that Brian Lara uttered at Barbados four years ago, after his final international appearance had ended with a cruel run-out and a one-wicket defeat at the hands of England in the 2007 World Cup.

The same question - and the same affirmative answer - would undoubtedly apply to England's chaotic campaigners this time around. Then as now, the players in question are braced for a humiliating early exit from the grandest of global tournaments, but given the treats they've served up so far, there's no doubt they'll be missed if they fail to scrape into the knock-out stages.

After five cliffhangers in five contests, the permutations are simple. Anything less than a victory, and England are gone, eliminated in embarrassing fashion for the fifth World Cup in succession. Even if they do rally themselves for one last push towards qualification, it might yet be a futile gesture, with Bangladesh and West Indies in a position to squeeze England back down to fifth spot if they can both win their final fixtures against South Africa and India respectively. It's an "arse-nipper", as Graeme Swann succinctly put it earlier this week. But England being England, they wouldn't settle for anything less.

However this make-or-break fixture pans out, England are sure to be recalled as the story of this World Cup, for without them what would the point of this first month have been? While the big guns in Group A have chugged effortlessly to the last four, Group B has been a thrill-a-minute with three of the four qualifiers still to be decided.

That is thanks almost entirely to the fluctuating standards of an England squad that has forgotten how to close out a contest - no matter what the calibre of opposition may be. Mental exhaustion is clearly a factor, but the adrenaline of impending elimination may aid them in their bid for survival.

After their miserable stop-over in Chittagong, the squad has limped back to Chennai, the scene of their finest performance of the tournament to date, even if the finesse was limited to the final 16 overs of their effort in the field. A two-paced and spin-friendly wicket enabled England's bowlers to tap into some long-forgotten knowhow from their Ashes victory in Australia, although their batsmen had already steered them into familiarly choppy waters in being bowled out for 171 in 45.4 overs.

Quite what West Indies will make of such maverick opposition is anyone's guess. With ferocious hitters such as Chris Gayle and Kieron Pollard in their ranks, allied to the more conventional class of Darren Bravo, they are more than capable of shredding a bowling attack that has slipped onto auto-pilot all too frequently. Meanwhile the pace of Kemar Roach and the competitiveness of Sulieman Benn provide an edge with the ball that cannot be underestimated, as Bangladesh among others can testify.

A fortnight ago in Dhaka, West Indies routed Bangladesh for 58, one match before those same Bangladeshi batsmen put the skids under England's campaign with a thrilling two-wicket victory in Chittagong. Likewise, the same South African outfit that crumbled to a six-run defeat against England put West Indies firmly in their place in their opening match of the group stage, with AB de Villiers' century easing them to a seven-wicket win.

If England have lost the games they were expected to win, and vice versa, West Indies have taken a much more sedate route towards the quarter-finals. They are not there yet by any means, and could face an anxious final game against India if they don't come up with the goods in this contest. But come 2.30pm on Thursday, it'll be time to board the rollercoaster once again. Given what we've seen from West Indies' opponents so far in the competition, this one promises to be emotional.

Against South Africa last week, Chennai provided a surface that Graeme Swann would wish to roll up and lug with him around the subcontinent (although the number of internal flights might persuade him to dump it somewhere in transit ...) With sharp turn and vicious bounce, it was Swann's spell that sowed the first seeds of doubt in South Africa's hitherto serene progress, and though he picked up the solitary wicket of Graeme Smith, his efforts emboldened every other member of the attack. The scenario was markedly different against Bangladesh in Chittagong, however, when the dew-sodden surface denied him what he felt were his just rewards, and led to a 10% fine for an audible outburst. With more floodlights in prospect, he might hope to get through his stint in the first innings.

Kieron Pollard has a career average of 21.87 in 36 ODIs, figures which scarcely do justice to the hype he has attracted in his short career, particularly in the Twenty20 format. But in a nip-and-tuck contest against Ireland last week, he unfurled his full repertoire in a savage and game-changing onslaught. His 94 from 55 balls included a ballistic tempo-change in the Batting Powerplay, a facet of the game that England have consistently failed to exploit. If England's bowlers fail to nail their lengths - and who knows what length works for a man with such a keen eye? - he is capable of ending their campaign in a matter of overs.

Injuries were England's biggest problem in the early stages of the tournament, but now it is illness that is undermining their preparations. Andrew Strauss and Graeme Swann both missed training on Tuesday, although they are expected to be fit, while attention now turns to Ajmal Shahzad, who bowled three jaffas and a lot of dross against Bangladesh, but nevertheless looked their most potent source of wickets. If he is deemed unfit, then James Anderson could earn a reprieve after reports in the press had suggested he was set for the axe. Chris Tremlett's suspect temperament held up well in extreme circumstances in the Ashes, but this would be quite a cauldron for his maiden outing of the campaign.

Chris Gayle missed the Ireland victory with an abdominal strain but he is expected to reclaim his place at the top of the order. Nikita Miller is the first-choice spin twin for Sulieman Benn, although the success of Imran Tahir in the England game has tempted Darren Sammy to consider a wristy of his own. "It's food for thought," said Sammy, "whether we should play [Devendra] Bishoo tomorrow."

Strauss anticipates another low turner, which may yet influence the selection of an extra spinner, although neither Michael Yardy nor James Tredwell are treated with much confidence at present.

England and West Indies have faced each other on five previous occasions in World Cup history, although West Indies' only victory came in their first encounter, in the 1979 final at Lord's.

The teams have faced each other on three previous occasions in India - in the 1987 World Cup, in the 1989 Nehru Cup, and in the 2006 Champions Trophy. England have won two of those three encounters.

"West Indies haven't been put under real pressure other than the South Africa game and the challenge for us is to put them under pressure right from ball one and see how they respond." Andrew Strauss believes England are more battle-hardened than their opponents

"If there is dew just get the towel and wipe the ball. Simple." Darren Sammy makes light of the problems that afflicted England against Bangladesh

Comments
Topics mentioned in this article
England Cricket Team West Indies Cricket Team MS Dhoni Gary Kirsten World Cup 2011 Australia Cricket Team Ravi Rampaul Bangladesh Cricket Team Cricket
Get the latest updates on India vs South Africa and check out  Schedule, Results and Live Score. Like us on Facebook or follow us on Twitter for more sports updates. You can also download the NDTV Cricket app for Android or iOS.