Shahid Afridi has denied reports that said he would not allow Sachin Tendulkar to get his 100th international ton in the World Cup semi final against Pakistan in Mohali on Wednesday. 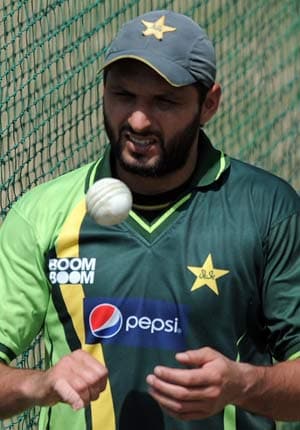 Shahid Afridi has denied reports that said he would not allow Sachin Tendulkar to get his 100th international ton in the World Cup semi final against Pakistan in Mohali on Wednesday.

"How can I stop anybody from scoring a century against any team? I am a big fan of Tendulkar," Afridi, who has a Tendulkar shirt framed and hanging in the dressing room in his Karachi home, told MiD DAY on Monday.

A section of the media had quoted Afridi as saying that his team would make sure the Indian maestro didn't get his landmark century during this World Cup.

"He (Tendulkar) will have to wait until after the World Cup to reach the landmark. We will try and make sure no batsman plays a long innings," the Pakistan skipper reportedly said. However, Afridi denied the comments attributed to him.

"I didn't give any such interview. I never said anything like that. As an opposing captain, I want to get Sachin out as soon as possible but it is not in my hands to stop him from scoring a century," he said.

"Tendulkar is a great player. If he scores a century it will add to his greatness," Afridi added.

Comments
Topics mentioned in this article
Sachin Ramesh Tendulkar World Cup 2011 Shahid Afridi Cricket
Get the latest updates on ICC T20 Worldcup 2022 and CWG 2022 check out the Schedule, Live Score and Medals Tally. Like us on Facebook or follow us on Twitter for more sports updates. You can also download the NDTV Cricket app for Android or iOS.