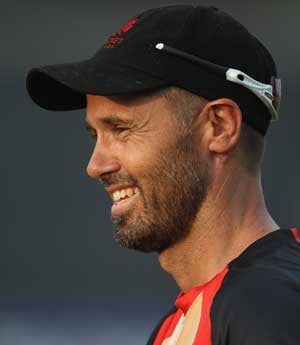 Davison, born in Canada but brought up in Australia, found fame in 2003 when he smashed the then fastest-century in World Cup history, off just 67 balls, including six sixes and seven fours, against the West Indies at Centurion.

What made Davison's innings all the more remarkable was that he'd made his name as a cricketer as an off-spinner, playing in the Australian domestic first-class Sheffield Shield for Victoria and South Australia.

Davison's record mark was subsequently lowered by Australia's Matthew Hayden at the 2007 edition and broken again this World Cup by Ireland's Kevin O'Brien, who his 100 off just 50 balls during the shock win over England in Bangalore.

Davison, 40, retired from Shield cricket several years ago and is now a coach at Australia's national academy in Brisbane.

What made Davison's record-breaking innings all the more remarkable was that he made his name as an off-spinner, playing in Australian domestic cricket against the likes of current Australia captain Ricky Ponting.

"I was hitting it a lot better than I am now," joked Davison as he recalled his whirlwind century. "It was a fantastic wicket, the ball wasn't swinging and I was able to hit through the line of the ball.

"It was just one of those days where everything I tried came off, so hopefully there's one more innings like that left in me," Davison said.

Canada captain Ashish Bagai, paying tribute to Davison's influence on the game in the North American nation, said: "He's been a fantastic ambassador for the game in our country. He's given Canada a name in world cricket."

Australia's Matthew Hayden broke Davison's record at the 2007 World Cup and it was broken again at the ongoing tournament by Ireland's Kevin O'Brien, who reached three figures off just 50 balls against England.

Comments
Topics mentioned in this article
World Cup 2011 Fernando Alonso Cricket Australia Cricket Team Canada Cricket Team John Davison
Get the latest updates on IND vs NZ 2021, check out the Schedule and Live Score . Like us on Facebook or follow us on Twitter for more sports updates. You can also download the NDTV Cricket app for Android or iOS.