Canada are aware that they have the best chance to win a match in the World Cup against Kenya and skipper Ashish Bagai on Sunday said they would look to strangle the African team in a web of spin on Monday. 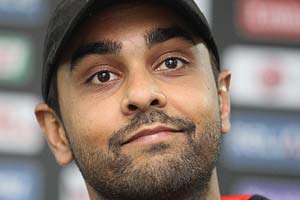 Canada are aware that they have the best chance to win a match in the World Cup against Kenya and skipper Ashish Bagai on Sunday said they would look to strangle the African team in a web of spin on Monday.

Bagai said Canada would look to play an extra spinner and might even open the innings with a pace-spin attack at the Feroze Shah Kotla stadium here on Monday.

"It is probably the best chance for us to win a match in the World Cup. We had that goal coming here and hopefully we will win tomorrow," Bagai told reporters here.

"Probably we would play with an extra spinner in Parth Desai, we might even open the innings with a spinner. Kenya too have some good spinners so it would be a game of spin," he added before joining his teammates for a net session.

Canada have lost all their three matches so far in the World Cup and Bagai said they would look to better their performance and finish on a high.

"We have a lot to play for in the World Cup, three games to go and though there is very slim chance to make it to the quarters, better cricket in the next few days will give us success and help us finish on a high," he said.

Canada's batting has been a problem as in all the three matches, their batsmen could not bat out the stipulated 50 overs and Bagai said a good performance from the top order would be crucial on Monday.

"Batting for us is sort of internal not so much for the opposition. We batted for around 40 overs in the previous matches but batting has been a bit of a problem and it has been tough and we hope we get better and better," Bagai said. "Top order would be crucial to set a base for us and help the next batsmen to step up for the innings," he said.

"His role is just not playing in the side, it is more than what he does on the field. It is what he offers to the young guys, myself and the team with his experience of last 10 years."

"He struggled with the bat at the top of the order so we have to re-evaluate the batting order but he would have a big role to play at the match tomorrow," he added. Asked about the poor form of their other opener Nitish Kumar, Bagai said he is still young and has a lot of time to prove his worth for the team in the years to come.

"He is just 16 and he probably doesn't even know what is going on there. But he is young and simple boy and we would make sure he doesn't get frustrated with his batting and keeps it simple and comes out with a positive experience rather than a negative experience. He has a lot to years to show what he is capable of," he said.

Bagai, who was born in Delhi, also expected a lot of fan support for his team on Monday as there are many Indians in the side.

"It feels great(to come back to India). I have a lot of friends and family too, my grandparents, cousins are all here, so it is a great feeling," he said.

"We have a lot of Indians in the side and we hope to get a good support here," he added.

Comments
Topics mentioned in this article
World Cup 2011 Ashish Bagai Cricket
Get the latest updates on ICC T20 Worldcup 2022 and CWG 2022 check out the Schedule, Live Score and Medals Tally. Like us on Facebook or follow us on Twitter for more sports updates. You can also download the NDTV Cricket app for Android or iOS.