The British and Australian media marvelled at Sachin Tendulkar's astonishing luck and hailed India as deserving finalists of the cricket World Cup, saying Mahendra Singh Dhoni's men were way better than Pakistan in dealing with pressure during the engrossing semifinal. 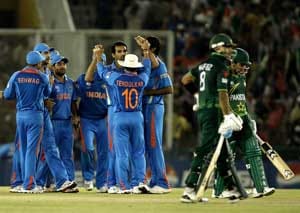 The British and Australian media marvelled at Sachin Tendulkar's astonishing luck and hailed India as deserving finalists of the cricket World Cup, saying Mahendra Singh Dhoni's men were way better than Pakistan in dealing with pressure during the engrossing semifinal.

"The Great Game between these feuding neighbours failed to materialise after India won a faltering match to take their place on Saturday against Sri Lanka in the World Cup final. They were deserved winners, mostly because a team who squander five chances, as Pakistan did when India batted first, do not deserve to win anything let alone the semi-final of cricket's biggest tournament," the newspaper said.

"This is probably Tendulkar's last chance to win the World Cup so perhaps that, as well as having his hundredth international hundred hanging over him, added to the pressure of an already tense occasion. Yet, whatever it is that disrupts the little master's flow, it afflicted him yesterday and he should have been out on 27, 45, 71 and 80.

"Before those let-offs, he had also survived an lbw and a stumping, both of them adjudicated by TV replay, by a hair's breadth."

The 'Herald Sun' in Australia also said that Pakistan lost the match because of the four dropped catches. "Pakistan drop their bundle," read the headline.

"They say one moment can decide a match, but four moments sealed Pakistan's fate as they dropped batting wizard Sachin Tendulkar four times on their way to a World Cup semi-final loss to India."

'The Guardian' in England ridiculed the dropped catches and said, "to drop him once was unfortunate. To do it four times beggared belief."

"Shahid Afridi, the Pakistan captain, seemed to go through all five of the stages of grief. Denial as he patted Misbah-ul-Haq on the bum after he dropped the ball at midwicket. Anger as he ran his fingers through his hair when Younus Khan fluffed one at extra cover. Bargaining with the umpires over those referrals.

"Depression when Kamran Akmal let an edge fly by his gloves, and finally meek acceptance when Umar Akmal spilled a final chance at mid-off. Finally Tendulkar hit the ball to Afridi who took the catch just in time to save his sanity."