With the likes of Sachin Tendulkar and Virender Sehwag in the order, India's batting line-up boasts a list of names that should make it the most formidable at the World Cup. 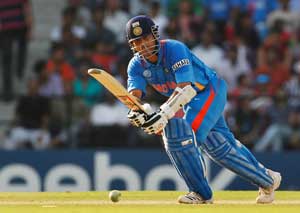 With the likes of Sachin Tendulkar and Virender Sehwag in the order, India's batting line-up boasts a list of names that should make it the most formidable at the World Cup.

As brilliant as it is, though, the batting line-up has been a little bit brittle at times. And it's situation the tournament co-hosts need to remedy quickly or risk a disappointing quarterfinal exit to defending champion Australia.

Hard-hitting batsmen Sehwag, Yuvraj Singh, Mahendra Singh Dhoni and Yusuf Pathan were expected to build on the work of Tendulkar, Gautam Gambhir and Virat Kohli, but instead India has been plagued by late collapses.

India lost nine wickets for 29 runs against South Africa and also slid badly against England and the West Indies.

Captain Dhoni concedes the collapses have been a concern as India also lost its last seven wickets for 33 runs in a high-scoring tie against England and seven for 50 during an 80-run win over the West Indies.

"It is (a concern), but as you say, you can see there's a gradual improvement," Dhoni said after the last group match against the West Indies. "Hopefully, in the quarters we'll be at our best, that's the positive I'm taking out of it."

Facing the likes of Australian pace trio Brett Lee, Shaun Tait and Mitchell Johnson will pose a challenge. The Indian players will be more comfortable against the inexperienced Australian spinners - if they hang around to give themselves a chance.

India's best batting performance remains its opening game against Bangladesh at Dhaka, when it posted 370-4 with Sehwag scoring 175 and Kohli making 100 not out.

Tendulkar has notched two centuries and Yuvraj has chipped in with a ton against the West Indies apart from a few other useful knocks, but the combined batting efforts have been difficult coming.

Dhoni has been modifying the batting order in a bid to fix the issues and cover injuries.

Another glaring problem has been India's inability to capitalize on the scoring opportunities created during the batting powerplays, when only three fielders are permitted outside the 30-yard circle.

In the batting powerplays, India lost 4-33 against South Africa and 4-28 against the West Indies.

Dhoni says India can do better because it hasn't realized its full batting potential in the tournament. He even turned a negative into a positive.

"One big positive for us, we have not utilized the second powerplay to the fullest, which means if we do that in a game, we'll score 20 to 25 more runs."

Comments
Topics mentioned in this article
Virender Sehwag World Cup 2011 Cricket Sachin Ramesh Tendulkar India Cricket Team
Get the latest updates on ICC T20 Worldcup 2022 and CWG 2022 check out the Schedule, Live Score and Medals Tally. Like us on Facebook or follow us on Twitter for more sports updates. You can also download the NDTV Cricket app for Android or iOS.