A World Cup in the sub-continent was largely expected to serve up run feasts but bowlers have spoiled the party, much to the delight of the traditional sufferers of the 50-over game. 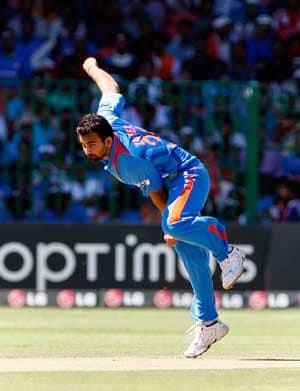 A World Cup in the sub-continent was largely expected to serve up run feasts but bowlers have spoiled the party, much to the delight of the traditional sufferers of the 50-over game.

With the one-day format already loaded heavily in favour of batsmen, placid wickets in India, Sri Lanka and Bangladesh were only supposed to make life more miserable for the bowlers.

When India racked up 370 for four wickets in the opening game against Bangladesh in Dhaka, the writing seemed to be on the wall.

But quality bowlers have learned how to rein in the batting marauders.

A shrewd mix of bowling variations and plenty of patience yielded dividends as the likes of Pakistan's Shahid Afridi and India's Zaheer Khan reaped rewards.

Afridi has emerged as the tournament's highest wicket-taker and in the process revived leg spinning as well as the fortunes of his team who have now reached the semifinals.

"Our success so far has been entirely due to the bowlers who have done a very good job," said Afridi.

"I am doing my level best for the team and it is turning out well for me."

South Africa have also prospered on the back of some fine performances by their bowlers, led by pace bowler Dale Steyn.

But the Proteas have also moved away from their tradition of relying heavily on fast bowlers and including as many as three frontline spinners.

They opened the bowling in their first match against the West Indies with off-spinner Johan Botha who struck immediately to remove the dangerous Chris Gayle in the first over.

"We three spinners are a lot different from each other," said Botha.

"They attack and I keep the runs in check. We also have world-class seamers which gives us a really good bowling attack."

A good seam-spin attack saw South Africa emerge as the only team who bowled out their opponents in all six of their league games.

"The most-balanced team has been South Africa, and now it is a matter of putting it all together on the day," said former West Indies fast bowler Michael Holding.

"They have the best bowling line-up, with two very good fast bowlers, an experienced medium-pacer and three spinners to pick from."

The bowlers owe some of their success to pitches that have not exactly been tailor-made for batsmen.

If the ball comes on to the bat, there has also been enough movement for fast bowlers and turn for spinners.

While there were a few 300-plus totals in the league round, in matches involving two Test nations the mark was breached only five times.

Four of these came in matches involving India as they have the batting might to get the big scores but have fallen flat when it comes to quality bowlers, with the exception of left-armer Zaheer.

Even the batting powerplays - introduced to allow the batsman to hit over the ropes more often - have ironically ended up helping the bowlers more.

Twice in two games India have struggled in batting powerplay, losing five wickets for 30 against South Africa, and being bowled out with 20 balls to spare against West Indies.