As the World Cup enters its knockout stage, bookies and punters are licking their lips at the prospect of making a killing. 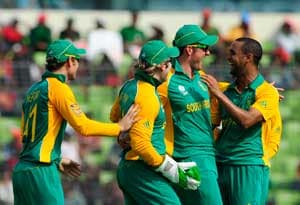 As the World Cup enters its knockout stage, bookies and punters are licking their lips at the prospect of making a killing.

Consider this at the start of the tournament India was a clear favourite to lift the World Cup at the Wankhede stadium in front of a roaring home crowd.

However, after the conclusion of the 42 league matches, India has slipped to second position on the bookie charts.

The home team's lacklustre bowling and fielding display is one of the main reasons for the punters to rethink the odds. Instead, the South Africans have now emerged as clear favourites to win the World Cup.

Secondly, as per the bookies' prediction India will take on Pakistan in the semi-final at Mohali on March 30. A match considered to rake up more money than the World Cup final itself for the bookmakers.

According to the odds put up by punters, Pakistan (55 paise) is a favourite to win the first quarterfinal against the West Indies (Rs 1.78).

While India (75 paise) is set to hand out the second defeat of the tournament to Ricky Ponting's men (Rs 1.28) at Ahmedabad.

South Africa at 40 paise is pipped to send the Kiwis (Rs 2.30) home, and the Lankans (55 paise) are likely to end England's (Rs 1.80) dream of a maiden World Cup title.The biggest money-spinner for the bookies will be an India-Pakistan clash in the World Cup.

According to the odds, India will square up against Pakistan at Mohali where a few thousand crores are set to change hands during the day-night fixture.

Some of the bookies fear that gangster Dawood Ibrahim and his cronies might flex their muscle or threaten players during these crucial matches. Bookies also predict that all the matches will end in nail-biting finishes.

This gives them enough chance to lay a combination of bets on sessions and ball-to-ball bets.

Insiders informed that most of the top bookies and their punters have shifted their base to plush farmhouses outside the city limits. A large number of bookmakers have migrated to Gujarat and few even to casinos in Goa.

Comments
Topics mentioned in this article
South Africa Cricket Team World Cup 2011 Cricket
Get the latest updates on ICC T20 Worldcup 2022 and CWG 2022 check out the Schedule, Live Score and Medals Tally. Like us on Facebook or follow us on Twitter for more sports updates. You can also download the NDTV Cricket app for Android or iOS.