Big Phil up against his own

Phil Simmons, Ireland's coach and former West Indies all-rounder, wears his new hat with aplomb but is all set to face one of the stiffest tests of his career. 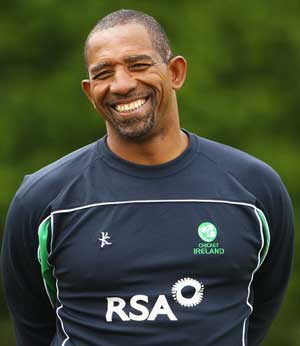 Phil Simmons, Ireland's coach and former West Indies all-rounder, wears his new hat with aplomb but is all set to face one of the stiffest tests of his career.

The 47-year-old Simmons easily qualifies as the most experienced member of the Irish squad, having had a taste of four previous World Cups - three as a player and once as assistant to Ireland coach Adrian Birrell in 2007.

In fact, Simmons is one of the few cricketers who played his first and last ODI in the World Cup, separated by 12 years.

His one-day figures - 3,675 runs from 143 games with five centuries and 18 fifties - do little justice to his big-hitting talent.

And while he cannot turn back the clock, he has a chance this time to prove his credentials as an inspirational coach.

Ireland went into the showpiece tournament with little expectation of causing an upheaval despite packing off Pakistan early from the 2007 edition in the Caribbean.

There was little to suggest there would be a shock when they crashed to a 27-run loss in their opener to Bangladesh, a team they had also defeated in 2007.

But what unfolded four days later against England raised their stock by several notches and fuelled expectations of them enjoying an extended trip in the sub-continent.

Unheralded Kevin o'Brien stormed into the record books with the fastest century in World Cup as Ireland pulled off a three-wicket win.

Ireland fast bowler Boyd Rankin was quick to give the credit where it was due.

"Simmons is a laidback guy and a perfect man to have around in such situations," said Rankin, recalling the events that unfolded as Ireland chased an almost improbable 328-run target.

"He constantly reassured us that the target was within reach and it could easily be managed."

Simmons will be required to do it again against West Indies and perhaps a lot more as the opponents this time are more familiar.

As an insider, he will be expected to pass on the valuable knowledge that he must have on each of the players, their mindset, weaknesses and strengths.

The stakes could not be higher for both teams as a favourable result could go a long way in deciding the quarter-finalists.

Simmons, who took over as Ireland's chief coach after the 2007 World Cup, is quietly confident of his team's chances.

"That is the big plus this time."

But he admits there is a downside to the familiarity as well.

"We are no longer seen as a surprise package, so none of the games will be easy. They will be a little bit cautious and they realise we play proper cricket.

"We are hitting right areas when we bowl and playing good shots when we bat. So there will be no complacency from them. They will play us as if they are playing Australia, so we have to prepare for that."

Comments
Topics mentioned in this article
Cricket West Indies Cricket Team Ireland Cricket Team World Cup 2011
Get the latest updates on ICC T20 Worldcup 2022 and CWG 2022 check out the Schedule, Live Score and Medals Tally. Like us on Facebook or follow us on Twitter for more sports updates. You can also download the NDTV Cricket app for Android or iOS.