Beer to flow as freely as runs

As bar owners screening the megamatch stock up for eager patrons, some 4 lakh litres of beer is expected to be guzzled because of the India vs Pakistan match on Wednesday. 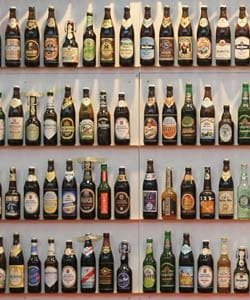 As bar owners screening the megamatch stock up for eager patrons, some 4 lakh litres of beer is expected to be guzzled on Wednesday.

As India and Pakistan descend on to the battlefield at Mohali later today for the World Cup semi, a reliable lubricant to soothe tensed nerves is in acute demand.

So reveal bar owners across the city, who are piling up on stocks of beer, twice the usual, with the result that 4 lakh litres of beer is lying in their storage to see cricket-maniacs through today.

How'd we come to the phenomenal number? About 80 litres is what an average pub serves during the course of a normal day. On a day like today, they have ordered in double the volume.

So when the 2,500 permit rooms in the city serve 160 l of beer today, what you get is a sloshed city. But these are just the bar sales. Add those revelling at home and elsewhere, and you get a city, high to the heavens.

And the demand for coolers and refrigerators has commensurately gone up. All those extra kegs and crates need to be stored somewhere, right?

Vishesh Shah, owner of 20:20 restaurant and bar, Bandra has got extra tables and chairs for tomorrow as the number of enquiries for today's match is tremendous.

"We have received a number of enquiries from cricket-lovers asking us if we are screening the match. Looking at the cricket fever for today, we have laid out more tables and chairs in our outlet. It will get congested, but I don't think patrons will mind. Everybody wants to watch this match together," said Shah.

Shah has ordered in more beer and liquor, anticipating the demand from patrons. He expects three times the amount of beer consumed on a regular day to be downed today. His restaurant is offering unlimited food and liquor with a cover charge of Rs 1,000.

Meldan D'cunha, owner of Soul Fry restaurant, Bandra, also foresaw the inordinate demand. "After a long time, India and Pakistan are playing each other.

Nobody wants to miss that. Looking at the response and enquiries, we have stocked up our bar with liquor. We don't want to fall short at the last moment. We have got chillers so we can keep the extra stock cold," he said.

D'cunha added that the sale of beer, the preferred drink during summers at his joint, is expected to go high.

"If the match turns out to be extraordinarily interesting, the chances of liquor flowing shoot up as people might get in the mood to drink more." D'cunha has decided to give a flat 50 per cent discount on beer, for every wicket that Pakistan loses.

An official from United Spirits Ltd confirmed that bars and pubs across the city have piled up on the liquid gold. "Compared to daily consumption, bars have purchased triple the amount of liquor from us.

Beer sale is comparatively higher. Also, we received calls from bars asking for chillers and refrigerators to keep the stock cold," he said. He added that the demand for beer in the city is higher than any other city.

Sudhakar Shetty, president of Indian Hotel and Restaurant Association (AHAR), which has 8,000 members under its umbrella, said, "Most restaurants are going to make the most of the India-Pakistan match. We are expecting a good business today," he said.

"Luckily I have my own business. So I have decided to enjoy the match with my friends, who are all bunking office today. Most places we enquired from are packed. But we have decided to go to the nearest bar and catch the match while sipping beer," said Manthan Shah, event organiser.

Where the watering holes are expecting the equivalent of a business cycle boom, some eateries will suffer a lull.

Few Udipi joints like the New Sardar restaurant at Chinchpokli have decided to remain closed today. "We have more of a corporate clientele and lunch is the peak time for us.

As we are anticipating very few people to come because the match starts at 2 in the afternoon we have decided to remain close on the day," said VN Prabhu, hotelier.

"I start work at seven in the evening so I may not be able to watch the match when it is at its peak. I am not a cricket lover but I want to watch the match because it is India versus Pakistan,"
Schubert Vaz, a pianist who plays at a south Mumbai five-star hotel.

" I have to perform my duty. I asked for a leave but I didn't get it."
WR Guard P V Gupte.

"I will miss the excitement but I have reconciled myself to it. My job is a priority. If everyone abandons work to watch the match, who will look after the city and manage it?"

Comments
Topics mentioned in this article
World Cup 2011 Cricket
Get the latest updates on India vs South Africa and check out  Schedule, Results and Live Score. Like us on Facebook or follow us on Twitter for more sports updates. You can also download the NDTV Cricket app for Android or iOS.