BCCI upset with remarks against Dhoni

The Board of Control for Cricket in India on Wednesday, took strong exception to ICC General Manager Dave Richardson's remarks against Mahendra Singh Dhoni asking the Indian skipper to check the referral rules before raising objections. 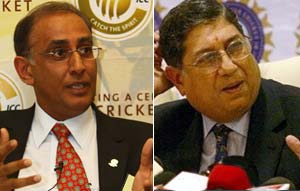 The Board of Control for Cricket in India on Wednesday, took strong exception to ICC General Manager Dave Richardson's remarks against Mahendra Singh Dhoni asking the Indian skipper to check the referral rules before raising objections.

The Indian skipper had objected to the decision to rule English batsman Ian Bell not out during their league match on Sunday. This was despite the decision being referred to the TV umpire under the Umpire Decision Referral System (UDRS). "Mr. Richardson's comment that the Indian Captain should
know the rule is out of place. The Indian captain only highlighted the inadequacy of the system and rightly so. It was there for the world to see," said the letter signed by BCCI secretary N Srinivasan.

Richardson on his part had said that the Indian skipper would have known that the decision was correct had he been aware of the rules. Srinivasan took strong objection to the remark saying that for an ICC representative to make such statements while the World Cup is taking place can pressurise the player concerned.

The referral system itself came under strong condemnation and BCCI, which has repeatedly raised its reservations, re-emphasized that UDRS continues to expose its inherent flaws in the ongoing tournament. "ICC in consultation with Hawk Eye formed playing conditions which specifies when the umpire can rely on Hawk Eye and when he cannot. This itself is an admission on the question of reliability of the system including ball tracking technology," the letter said. ( Also Read: ICC advises Dhoni to read rules before complaining | 'Adulteration of technology with human thinking is bad' )

Comments
Topics mentioned in this article
World Cup 2011 Cricket MS Dhoni
Get the latest updates on ICC T20 Worldcup 2022 and CWG 2022 check out the Schedule, Live Score and Medals Tally. Like us on Facebook or follow us on Twitter for more sports updates. You can also download the NDTV Cricket app for Android or iOS.