England skipper Andrew Strauss on Sunday accepted his team's poor batting but praised his bowlers for snatching a narrow six-run win over South Africa to enhance their chances of making the World Cup quarterfinal. 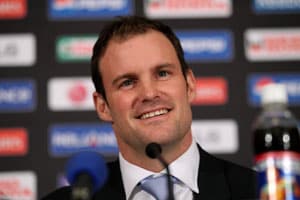 England skipper Andrew Strauss on Sunday accepted his team's poor batting but praised his bowlers for snatching a narrow six-run win over South Africa to enhance their chances of making the World Cup quarterfinal.

"It was a huge game for us. After the Ireland game, we really needed to come out and show some character. We did not do as much with the bat as we would have liked to. To be fair to the guys they dug very deep in the field and I was delighted with the bowlers who pumped around and came out and showed what they can do," he said.

Strauss, however, made it clear it was not the best win for England since they batted poorly.

"Losing three wickets early on a wicket like that was criminal really. Thankfully Trott and Ravi got us back in the hunt.

"You are not going to defend 170 odd very often. But we need things to go our way. Swann bowled outstandingly well. Jimmy Anderson and Stuart broad made crucial breakthroughs at the right time when the ball started reversing.

Strauss said his team had three close matches so far in the tournament and they don't want any more nail-biting finish.

"We have been involved in three very tight games in cricket in this world cup so far, we are definitely doing our bit to advertise 50 over format," he said.

"We would like to play a lot better in the tournament. There is no doubt about that. But, it is no good that you are winning all your group games comfortably and then come in the back end and you are slightly let down.

"We have been involved in tight games in this tournament. We have won two of them and tied one. In that way, it is encouraging but certainly we do not want play ourselves in such positions every time we play," he added.

Asked whether this pitch was good enough for world cup game, Strauss said "I mean history suggests that you do not often play on pitches like that. Generally one day cricket, you would like to play on flat wickets. But sometimes pitches like this makes the most for turning cricket.

"It was turning here and perhaps in England a similar pitch might bounce. It is different in that respect. If I am pushed on outside and perhaps broke up too much, but it was a good toss to win."

Strauss heaped praise on Stuart Broad and said the pacer had been a very important part of England's one-day side for a while now.

"Stuart has had a frustrating winter. He was not there to celebrate the Ashes win. He did very well in the warm up games but came up against that Bangalore wicket which was tough one for bowlers," he said.

"He is a wicket-taker for us in one-day games. That's crucial over here, fine way is to take wickets when its not seaming and bouncing its coming low. He showed good range of skills today," he added.

Chasing 172, South Africa were crusing at 60 for no loss but Strauss said even at that stage he believed Proteas had a chance to win.

"I still thought we had a chance there. Smith was finding it very hard against Swann. There was a lot of turn and bounce there. You need to get on the roll, you need to ask questions and get them in a situation where there is pressure on," Strauss said.

"All credit to the bowlers. They have done it for us. Always a tough situation for the tail enders to come in when the ball is reverse swinging or spinning as they are not well qualified to deal with it," he said.

England will play India and Ireland next but Strauss said the key for his team was to focus on the Bangladesh game which would be held in Shere Bangla stadium in Dhaka.

"We have not been consistent in this tournament so far but we can win one or two. We want to win both games handsomely, which will give us some momentum going in to the quarterfinal," he said.

"The key for us is to concentrate on the Bangladesh game, which is going to be tough for us. It is a must win game for them and they are going to have lot of support there."

On selection of Ravi Bopara, Strauss said, "It was a great selection. Ravi has been in good form in games he has played, he is becoming more experienced player now and an exciting player to have in our side.

"He thoroughly deserved his chance. And he took it. Tough call because Paul Collingwood has been a big member of our side for a long time, Paul may have a role to play further on in this tournament depending on the balance of side. For the time being Ravi looking as a good option at No.5," he explained.

Man of the Match Bopara, who was also present at the post match conference, said though he was happy with the award, it should have been given to pacer Stuart Broad for his four for 15 in 6.4 overs on Sunday.

"Obviously very pleased with the result. I think the man-of-the-match should have gone to Stuart Broad. When he bowled he made a massive difference and really made it count.

"Obviously, I am delighted with my performance. We thought it was not an easy wicket and 200 would be a good score. But we did fall short. But we knew the ball is going to reverse and turn. We had all those areas covered with Swann, Jimmy and our seamers, who can reverse it," he said.

Comments
Topics mentioned in this article
Andrew Strauss Eoin Morgan World Cup 2011 Cricket
Get the latest updates on India vs South Africa and check out  Schedule, Results and Live Score. Like us on Facebook or follow us on Twitter for more sports updates. You can also download the NDTV Cricket app for Android or iOS.